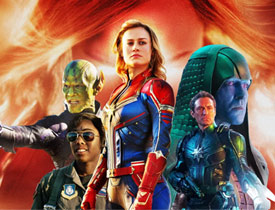 The latest outing from the Marvel universe, Captain Marvel is all set to enthrall the movie lovers. The trailers have raked up the excitement factor and Marvel fans are eager to catch a glimpse of what is on offer this time. We have watched the Telugu version and let’s check whether the film matches the sky high expectations laid upon it.

Carol Danvers(Brie Larson) is a lady pilot, who has a troubled past. She has some unearthly powers, but she is yet to get a grip on them. Carol works for the Super Intelligence, who claim that they are the ones who gave her superpowers.

Incidentally, she comes to know about her past and the demons in it. She needs to pick the righteous path now and put her powers to proper use. Will she be successful in the process? What are the challenges that she faces? The answers to these questions are to be watched on the big screen.

Brie Larson suits the role perfectly. She blends charm with intensity and carries the film on her shoulders. Samuel L Jackson is at his usual best.

The characterization of Captain Marvel drops subtle hints that the is one of the most powerful Marvel superheroes of all time. Related scenes in the post credits, which are linked with Avengers: End Game, will thrill Marvel followers.

The backstory behind the formation of a formidable force like the Avengers has been portrayed really well. The film also deals with underlying problems in current day society like women harassment.

Captain Marvel has a relatively intriguing and captivating plot. However, the screenplay is patchy. The film drops pace more often than not. This takes a toll on the overall movie-watching experience at times.

In the second half, the viewer keeps expecting that something big is going to happen in the very next scene, but the subsequent episodes are underwhelming.

The film is jointly directed by Anna Boden and Ryan Fleck. They mainly concentrate on the emotional connect rather than the visual grandeur and that will connect well only with a section of the audience. The Telugu dubbing done is also decent as the lingo and dialogues do not sound odd.

The background music is very ordinary. However, camera works are bang on for this superhero flick. Also, the CGI and VFX are commendable. Costumes and make-up are near to perfection. They add a whole lot of authenticity to this film.

On the whole, Captain Marvel is a decently engaging superhero flick, which undeniably hits a few bumps here and there. The film gets benefited by some stellar performances from the lead cast, especially the lady lead Brie Larson. Captain Marvel will connect well with Marvel fans but the general audience may feel it just above average.