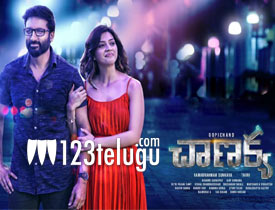 Gopichand and his team have dared to release their new film Chanakya amidst the huge craze of Sye Raa which was released a few days back. Let’s see whether this spy thriller has anything interesting in store for us or not.

Indian government is on the look out of a dreaded terrorist named Qureshi(Rajesh Khattar) who has now camped in Pakistan. To bring him back, RAW appoints a dare and devil officer Arjun for the task. How does Arjun enter Pakistan? How will he nab such a dreaded terrorist? and where do Mehreen and Zareen Khan feature in this set up? To know this, you have to watch the film on the big screen.

As usual, Gopichand does a sincere job in his role. He looks fit as the RAW agent and shoulders the film throughout. Be it his fights or dialogue delivery, Gopichand has done a commendable job in the film. Nasser was perfect as the RAW chief and brought depth to the film.

The director starts the film with a good action sequence which looks engaging. Zareen Khan as the RAW secret agent makes a decent Telugu debut. She did her supporting role well. Mehreen was just about okay in her role and had nothing much to do. Sunil and Ali did well in their limited comedy roles.

Upen Patel is the surprise package of the film as he did the role of a stylish villian superbly. All his scenes with Gopichand have come out well. Certain action thrills based in Karachi have been planned well. The pre-climax scenes have been handled well and evoke a decent curiosity.

Firstly, the film is loosely based on several Hindi spy thrillers in recent times. It is heavily inspired from Nikhil Advani’s D Day. After starting the film with a bang, the makers bring in the same old comedy, song and dance routine. Gopichand’s romantic episodes with Mehreen are boring and dilute the proceedings completely.

Upon this, two songs come in and side track the film at crucial times. One of the biggest drawbacks is the disappointing screenplay which lacks the grip. Some good thrills are followed by silly and routine scenes. Thrillers need to be crisp and fast but sadly that is not the case with this film.

Also, there are way too many cinematic liberties which have been taken. Gopichand moves freely in Karachi and handles things swiftly in many areas and this looks over the top. Also, after all the hue and cry, you feel that the climax will be special but sadly things are ended in a hurried manner.

Camera work in the film is pretty decent as it manages to show Karachi and the terrorist set up in a decent manner. The production design needs a special mention as they have re designed Karachi and a few other areas in a believable manner.

Music is okay but the background score by Sricharan is pretty good. Editing is below par as the romantic track could have been cut short to make things crisp. This whole dog mating episode looks silly and could have been avoided.

Coming to the director Thiru, he has done a below par job with his narration. He has rehashed all the spy thrillers and got his story ready which looks decent. He also starts the film well and gives it a good tone and set up. But he too falls prey for unnecessary commercial aspects and derails the film. In the second half, he had too much on the plate and couldn’t handle it. That is the reason he rushed things with his improper screenplay which has many logical errors and questions unanswered.

On the whole, Chanakya is a routine spy thriller which works in a strictly few areas. While the action and Gopichand lead from the front, dull narration and poor screenplay take the film down in no time. Even though the film looks stylish, there is nothing new you will see here in this action thriller. So, go in with all your expectations in check.