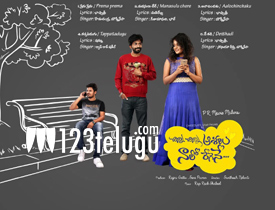 Continuing the trend of low-budget films, yet another project which has hit the screens today is Chinni Chinni Aasalu Naloregene. Let’s see how it is.

Santosh(Pawan) is a happy go lucky youth who traps a girl called Nithya (Sonia Deepthi) by naming himself, Rahul. Nithya too falls in love with Santosh thinking it is Rahul. The twist in the tale arises when Sonia finds out the actual truth of Santosh’s identity and breaks up with him.

Who is this Rahul? What does he have to do with Sonia? What kind of problems does Santosh face because of this? How does he solve his problems? That forms the rest of the story.

The manner in which the actual Rahul is revealed during the second half looks okay. The twist regarding Nithya’s character and her link with Rahul has also been executed well. The idea of how a small misunderstanding elevates into a love story looks okay.

Comedy scenes featuring Jabardasth Appa Rao are the only relief as the talented comedian does well in his role. Nithya Deepthi does a decent job in the film as her performance is quite good throughout.

One of the biggest drawbacks of the film is the main lead Pawan. He hams to no extent and has absolutely no screen presence at all. He needs serious acting classes as his dialogue delivery and approach towards the camera is pathetic.

The story has absolutely no weight and has many silly moments throughout. The love track that has been showcased is atrocious and does not entertain you one bit. The peak of irritation arrives when hero’s friends forcefully keep entering the plot for no reason.

Surprisingly, Shakalaka Shankar and Tagubothu Ramesh’s comedy gives you an instant headache. The second half too goes for a toss as every scene during this time disappoints you to no extent.

Camera work is the worst in recent times. There is absolutely no discipline in the visuals as every frame looks shaky and abrupt. Music is disappointing and so was the background score. Editing is below average as some irritating scenes during both the halves could have been easily edited out. Coming to the director Santosh, he has done a horrible job with the film. Right from his scene execution to the selection of actors, he has messed up the film to another level.

On the whole, Chinni Chinni Aasalu Naloregene is the most outdated and irritating romantic drama that has come out in the recent past. Except for the interval twist and Sonia Deepthi’s performance, every department in the film fails completely and leaves you dejected. Stay away from this one.