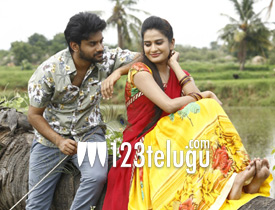 Stories set in small towns are quite realistic and offer good entertainment many a time. This week’s release C/O Godavari is also made with the same concept and has an interesting premise. Let’s see whether it lives to its expectations or not.

The story of the film is set in the small town village of Godavari region. Subbu and his gang of friends roam around aimlessly and become a huge burden to their parents. This is also the time when one of the friends in the group jokingly announces that Subbu is in love with Sunanda, the richest girl in the village.

This rumor of his creates a huge problem for Subbu as Sunanda’s brother bashes him up and kicks him out of his village. Rest of the story is as to how Subbu realizes his irresponsible behavior and becomes successful in life.

The basic plus point of the film is decent production values. The way the film has been set in a small town looks realistic and major characters chosen are good. The Godavari accent and the pun derived from it generates decent comedy during the first half. The actor who did the main villain’s role looks gives a very good performance.

Interval bang and the fun scenes generated amidst the friend’s group are okay. The story has a bearable feel throughout the first half and has some very likable dialogues. Some family emotions during the first half are executed quite well. The way Posani narrates the film is interesting.

One of the biggest drawbacks of the film is the placement of the songs. The film starts with a song, title credits roll with a song and romantic angle also has a song. In the first fifteen minutes, there are three songs which disturb the proceedings to an extent.

Also, the mass item number is forced into the proceedings irritating the audience to the core. Just when you think, the first half has decent moments and is nicely set up for the second part, you are disappointed with some outdated and routine scenes where the hero becomes rich.

Some boring and predictable scenes said above dilute the plot and take the film down completely. As the hero is quite naive, the emotions showcased and the way his transformation is showcased lacks depth. He looks way too weak to carry the entire burden of the film and that too opposite a strong villain.

As said above, the production values are very good. Music by Raghu Kunche is decent but sadly all his songs are misplaced badly. Dialogues need a special mention as they have been written with a lot of wits and showcases the Godavari flavor nicely. The screenplay is okay until the first half but takes a severe beating during the later part. Editing is just about okay as two songs could have been chopped off right away.

Coming to the director, he has done a half-hearted job. Even though he chooses a normal story, the way he sets the film in a small town is appreciable as he manages to generate some interest till the first half. But his narration during the second half is very bad as there is absolutely nothing that works for the film which is quite disappointing.

On the whole, C/O Godavari has some breezy moments during its first half. The native comedy and decent twists click to an extent. But the dragged out and a predictable second half, misplacement of songs and routine story nose dive’s the film and makes it just a below average watch and that too only for the first half itself.