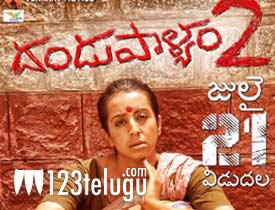 The recently released Dandu Palayam 2 created a lot of buzz because of Sanjana and her nude scene. Let’s now see how the dubbed version of the film turns out to be.

The story continues from where it was ended in the first part. As the entire gang from Dandu Palayam is prosecuted and 80 murder cases are registered on them, they get a death sentence.

This is the also time when a journalist takes up the case and starts investigating it. What will she find out? Did the gang really commit 80 murders? Are cops involved in all this? To know answers to these questions you need to watch the film on the big screen.

The biggest asset of this film is the suspense element. The way the director has created a curiosity factor whether the gang has committed so many crimes or not looks good at certain areas. Sanjana looks quite convincing in her de-glamorized role and does her best in her role.

Pooja Gandhi, Makarand Deshpande, and Ravi Kale look natural and make the set up look quite convincing. The way cops investigate and torture the gang, scenes like these look quite realistic and hard hitting. The film picks up the pace during the second half and has some good moments featuring the cops.

Just to drag the film to the third part, the makers dilute the climax to an extent and make the serious proceedings quite silly. There is no proper conclusion to many characters and as the film looks abrupt in many areas. The excitement that is created in the first part is completely missing here.

The so called nude scene of Sanjana is just used for hype and is missing in the film as the audience have been fooled by the makers. The first half is quite simple and does not offer much interest for the viewers.

Background score by Arjun is pretty impressive as he elevates many normal scenes with his good score. Credit should go to camera man Venkat who showcased the film is a very realistic manner. The investigation scenes, in particular, are executed quite well. Coming to the director Srinivasa Raju, he has done just an okay job with the film. He made the climax dull and because of this, the scenes that come in the pre-climax spoil the mood of the audience.

On the whole, Dandu Palayam 2 surely does not live up to its expectations. Though the film is very realistic with some very strong performances, the basic interest is not created for the audience as the narration gets diluted in the end. However, all those who liked the first part and are curious to see the second can give this film a shot. Rest can take it easy.