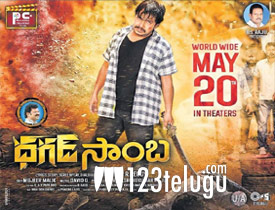 Dhagad Samba (Sampoornesh Babu) and his friend PK (Mahaboob Basha) go to Hyderabad. They become the tenants of a house owned by Apparao and Jyothi. Samba and PK fall in love with their owner’s daughters. When everything goes well, Samba gets to know a shocking truth. What’s the truth? Why did Dhagad Samba come to Hyderabad? What happened next? To know everything, you need to watch the main film on the big screens.

Films like Hrudaya Kaleyam and Kobbati Maata established Sampoornesh Babu as a comedy hero. Coming to Dhagad Samba, he also makes everyone laugh with his dialogues and actions. Sampoo performs so well in emotional scenes as well. To talk about his comedic timing, he could have done it better like in his earlier movies.

Besides comedy, his dancing skills are also good and especially the ‘Naatu Naatu’ step in the introduction song. Sampoo also looks slim in this film. Apparao’s screen presence is fine and delivers some good laughs throughout the film. Chalaki Chanti, Mahaboob Basha and Jyothi also did their part well.

The director is the one who penned the story of Dhagad Samba. The story itself is a big problem. Besides, heroine Sonakshi Varma and her sister have nothing to do with the film but only to woo their tenants. Their performances are also not up to the mark. Actress Jyothi’s character is a bit okay in the second half.

Though the movie has a nice point to convey, the director buries it by writing poor and senseless scenes all over the movie. The pre-climax scenes test your patience for sure. If he could have cast some noted actors and written good scenes, the film will become a good one.

Not only as a director but NR Reddy also fails as a screenplay writer. The movie could have been better if he concentrated much on the story, screenplay and characterisation. Music, especially the background score by David G is so poor. Cinematography and editing are just okay. The production values are average.

On the whole, Dhagad Saamba is a below-par horror-comedy movie that lacks almost everything. Barring very few comedy scenes, the movie has nothing new to offer. It’s better to avoid this film and wait for something else.