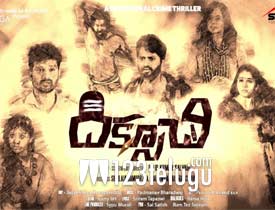 Continuing the trend of low budget films, yet another film called Diksoochi has released today. Let’s see how it is.

Dileep(Dilip Kumar) gets a call from an unknown person to transfer two parcels to a particular area failing which his parents will get killed mercilessly. Scared with this, Dileep does the needful and transfers the parcels to the unknown person.

To his shock, the unknown person reveals that the persons in the parcels were Dileep’s own parents. The unknown person now leaves a condition with Dileep to surrender to him within 24 hours. Who is this unknown person? What does he have to do with Dileep? How will Dileep save his parents? That forms the rest of the story.

One of the major plus points of the film is Dilip and Chatrapati Sekhar who have done a great job with their performances. Dileep was superb in his emotional role. Chhatrapati Sekhar was also neat in his role which suited his body language well.

Heroine Chandni looked good and did her role well. Bithiri Satthi evoked a few laughs here and there. The manner in which the direction takes the film into the main story without deviating much is thought of nicely. The runtime is also a decent plus for the film.

The entire second half goes for a toss. The suspense which was created in the first half is not carried on to the second part and this is where the narration falters completely. The screenplay goes for a toss once the story moves to Bahadurapuram.

In order to create more suspense in the second half, the director has written scenes which are over the top and do not make any sense. The flashback is also not that convincing as it lacks the depth. The younger generation will not connect with this story at all.

Dileep, who played the main lead has directed the film too. Though he was decent as the main lead, his direction is a major disappointment. He has faltered with his narration in the second half though the first half was okay. But he has extracted good performances from his technical team.

Camera work in the flashback episode was superb. Music was okay but the BGM was even better. Editing is okay and so were the production values.

On the whole, Diksoochi is a devotional crime drama which has a select few good scenes in the first half. But the second half is a disaster as the story, screenplay and narration falter completely. Except for Chatrapati Sekhar’s sincere performance, this film has nothing to offer and can be ignored this weekend.