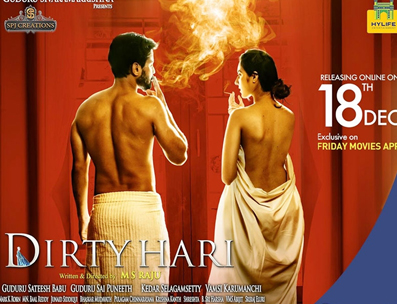 Continuing the trend of reviewing shows and films on OTT, today, a Telugu film called Dirty Hari has hit the small screens. The film is available on Friday Movies and let’s see how it is.

Hari (Shravan Reddy) is an ambitious man who lands in Hyderabad to make it big. He meets Vasudha (Rushani Sharma) a rich girl and falls in love with her. But in this process, Hari also gets attracted to Vasudha’s brother’s girlfriend Jasmine (Simrat Kaur). This creates a new angle in the story and Hari starts having an affair with Jasmine. What problems did Hari face in his martial life? How did he manage both the relationships? That forms the rest of the story.

Yet another major aspect of the film is the performances. The entire cast has done a very good job and the best among them was the main lead, Shravan Reddy. He is a perfect fit in his role and is very good in the film. The noted Hindi TV actor brings all his experience into the film and emotes quite nicely. Be it his dialogue delivery, expressions, or body language, Shravan suits perfectly in the setup.

Ruhani Sharma gets a good role and does well. Though her role looks dull, she gets a meaty part in the end and is very good. But the major attraction will be Simrat Kaur who has done a bold role in the film. Acting-wise too, she has done a good job and is the major eye candy in the film. The climax twist is brought in quite well and ends the film on a very interesting note. Surekha Vani was decent in her posh role.

As showcased from the trailers, the film is clearly made for today’s youth and will attract them. The pace of the film is a bit slow especially during the starting of the second half. Routine and repeated scenes are showcased and this sidetracks the film a bit.

Subject wise, there is nothing new as an ambitious guy falling for a rich girl, then two-timing her and having an affair has been tried in many films earlier in Hindi films. The cop episode, in the end, could have been handled in a more proper manner to give the film a good effect. Ruhani Sharma and her role should have been given more drama to make the thrills quite interesting.

Production values of the film are top-notch as the visuals are posh and nicely showcased. The camerawork is very good and the way all the lovemaking scenes are shot is impressive. Dialogues are good and the special mention should go to production design as the setup of the film is quite slick. The editing was okay and the music is impressive. The BGM was also quite effective.