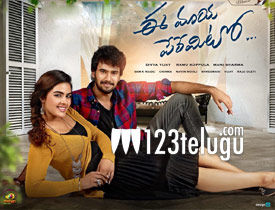 Rahul Vijay, the son of fight master Vijay is making his movie debut with the film Ee Maya Peremito. The film directed by Ramu Koppula has hit the screens today. Let’s see how it is.

Chandu(Rahul Vijay) is a happy go lucky youth who has a very good image in his colony, Impressed by his behavior, Sheetal(Kavya Thapar) becomes friends with Chandu and eventually falls for him. The twist in the tale arises when Sheetal’s father(Murali Sharma) finds out about his daughter’s love and confronts Chandu.

He promises Chandu that if he settles down in life, he will surely get his daughter married to him. Taking this seriously, Chandu starts to settle down in life but due to some unavoidable circumstances, Sheetal starts hating him. What are the problems that the couple face? Why is Sheetal upset with Chandu? and how does Chandu finally manage to marry Sheetal?. That forms the rest of the story.

Young hero, Rahul Vijay makes a decent debut and fits the role of a happy go lucky youth perfectly. He looks fit and is impressive in all the scenes with his mother and heroine Kavya Thapar. Satyam Rajesh and Tagubothu Ramesh evoke some laughs here and there.

Kavya Thapar is also good in her role. The way she performed in all the emotional scenes speaks volumes of her talent. Murali Sharma is top notch as heroine’s father and gives a settled performance. Rajendra Prasad brings a lot of depth to the proceedings in his role. The interval block has been handled well.

One of the biggest drawbacks of the film is that there is no flow in the proceedings. Except for the interval bang, rest of the scenes in the first half look forced. The basic emotion which was required in the second half was missing completely. Many scenes look artificial and do not elevate the proceedings at all.

Just to create some emotions, the director added many unnecessary scenes which were not required at all. The basic romance which is required in films like these is missing out in major part. The chemistry between the lead pair also takes a beating after a point of time in the film. Apart from this, all the scenes in this love and family drama are routine and quite predictable.

Production values by Divya Vijay are top notch as the makers have spent a good amount of money which shows on screen. Shyam K Naidu’s camera work is impressive as the realistic visuals have been showcased on a good note. Editing by Navin Nooli is below par as many unnecessary scenes could have been chopped off. Music by Mani Sharma was not up to the mark.

Coming to the director Ram, he has done a below par job with his narration. His story on paper looks good but the manner in which he narrated the film with many forced scenes look over the top and do not offer anything new.

On the whole, Ee Maya Peremito is a below-par romantic drama which has nothing much going its way. Debutante Rahul Vijay looks promising but the slow pace, outdated romance, and repeated scenes bring the film down in no time. All we suggest you is to try this film out only if you have nothing else to do but keep your expectations in check.