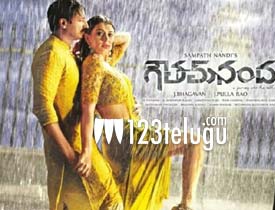 Gautam Nanda is one film which is very crucial for both Gopichand and director Sampath Nandi. The action entertainer has hit the screens today. Let’s see how it is.

Ghattamaneni Gautam(Gopichand) is a billionaire who does not know the true value of life. After facing a deep insult during a party, he decides to kill himself and crashes his car into Nanda(Gopichand), an upset and middle-class youth. To his shock, Gautam finds out that Nanda is his look alike and both of them start revealing their stories.

Gopichand is the main asset of the film as his fresh and new look is a welcome change for the film. Gopi is superb in both the roles and showcases decent emotions. The way his role makes a transformation, in the end, is nicely showcased by Sampath Nandi.

Hansika looks okay and so was Catherine Tresa. Credit should go to the director for showcasing the songs in an interesting manner. Chandra Mohan is impressive as the middle-class father.

The story of the film is quite old and does not have anything interesting to offer till the last fifteen minutes. Up to this time, you exactly know what is going to happen next. The heroines do not have much to do in the film and Hansika looks misfit as the slum girl. Even though the family emotions showcased are good they are showcased for too much time.

The film takes a lot of time to get into the actual storyline and unnecessary scenes deviate the film.The second song showcasing the basic middle class set up should have been edited out to make things better.

Music and background score by Thaman is pretty decent and help the film to a certain level. As said earlier, production values of the film are top class. Dialogues are neat and so was the art direction. Screenplay by Sampath slogs during the start but picks up during the end. Editing was average as the film can be trimmed by at least ten minutes.

Coming to Sampath Nandi as the director, even though he chose a routine story, he packs it well and ends the film on a convincing note.

On the whole, Gautam Nanda is an okay kind of film which gets interesting during the end. Gopichand’s interesting transformation and superb production values provide good eye candy for the audience. If you ignore the routine story line and a bit slow proceedings, this film has some decent moments and can be given a shot this weekend.