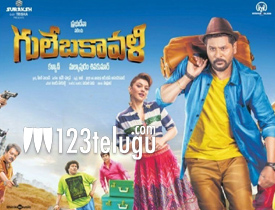 After a long gap, Prabhu Deva is back as a solo hero with this week’s release Gulebakavali. The film which also stars Revathy and Hansika in lead roles has hit the screens today. Let’s see how it is.

The film is all about a treasure which is hidden behind a temple called Gulebakavali. A small-time thief called Badri(Prabhu Deva) is appointed to rob the treasure. Excited with this, he starts his journey and in the course of time, he meets Hansika, Revathi and a few others who form a group to rob the treasure. Rest of the story is as to how this group sticks together and manage to get hold of the precious treasure.

Prabhu Deva still has the moves and capability to hold the film as a solo hero. He looks decent and is top class in his dances. His comedy quotient has been tapped quite nicely in the film. Revati is the surprise package in the film as she plays the con woman with ease. The way she goes about playing tricks at regular intervals and generates comedy is quite good.

Hansika plays her part quite sincerely and looks good in the songs. She has not been used well in the film as she has more of a supporting role. Some comedy by Yogi Babu and Rahman clicks here and there. Some thrills regarding the treasure hunt have been showcased well. The second half is a tad better than the first.

One the biggest drawbacks of the film is the over the top comedy. The fun in the proceedings and dialogues is lost in translation and everything looks so loud. Also, there is a heavy dose of Tamil flavor in the film which might not go well with the Telugu audience.

After the first engaging ten minutes, the film becomes a bit silly with unnecessary scenes of Prabhu Deva and his introduction taking center stage. The way the comedy is generated during this time is quite irritating.

Yet another major drawback of the film is it lacks direction. As the film is a treasure hunt, there should have been some twists to keep the audience engaged but sadly, the film falls off track every now and then boring the audience to no extent.

Music of the film is a big letdown as none of the songs make an impact. The background score is so loud that you can get a headache right away. Production values of the film are pretty good and so was the camerawork which showcases the treasure hunt in a decent manner. Editing is below par as some of the scenes in the first half could have been edited out right away. Coming to the director Kalyaan, he has done an average job with the film. Even after having a thrilling script, he failed to narrate the film in an interesting manner and adds irritating humor which bores the audience.

On the whole, Gulebakavali is an over the top and silly heist drama which has nothing much to rave about. Prabhu Deva’s comedy timing and some thrills in the second half are basic assets. The film falls flat after the first ten minutes and continues to sidetrack from the main plot every now and then. Lack of Telugu nativity also makes this film a boring watch this weekend. Watch it when it comes on TV.