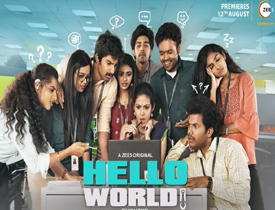 Niharika Konidela has come up with an office drama in Telugu titled Hello World under her production banner Pink Elephant Pictures. The show premiered on ZEE5 recently. Let’s see how it is.

Eight youngsters who hail from different places and who are under different circumstances get hired by an IT company. All of them enter the office space with different notions and stigmas regarding the workplace environment. They go shell-shocked after getting to know that they are under a temporary agreement and only on clearing the training program they would get permanent employment. Raghav (Aryan Rajesh) and Prarthana (Sadaa) give a ray of hope to the youngsters. We are also shown the rivalry between Raghav and Debashish (Ravi Varma). Raghav entrusts and places a huge responsibility on these eight youngsters. The show primarily focuses on the bonding and journey between these youngsters and how Raghav and Prarthana guided them.

The first thing that makes one like this show is its relatability factor. One would easily connect to the lead cast who enter a corporate world and who have minimal knowledge in their field. The backgrounds of these main characters are well established initially and give the show a good feel.

Though we have seen few films in the same flavor, the writing team did a splendid job in coming up with an office backdrop and different characters that any youngster and IT employee can easily relate to. The bonding between the youngsters is superbly showcased and would definitely reminisce our memories with friends. This is the main USP of the show.

All the lead cast did a fair job that makes us connect with the show instantly. Aryan Rajesh and Sadaa gave settled performances in their respective roles.

The dynamics and conflicts in a corporate world are neatly presented. The show is largely engaging. It also spoke about the work-life balance that should be present in one’s life.

One of the foremost drawbacks of the show is its technical jargon. Too much technical stuff regarding the IT thing has been used in the show. For a normal viewer, this may be way over the head. There are a few dubbing issues here and there. The last two episodes falter a bit.

Though the show is a representation of the corporate world, too much liberty has been taken. For instance scenes like these youngsters hacking the system to connect to the company director over a Zoom meet and convincing him for a project went overboard. More dramatization hampered its soul.

It tried to show too much content in a short duration. Few characters could have been explored much better. There are not many strong scenes between Aryan Rajesh and these eight people. One gets a feeling of what made these people work so hard to complete Raghav’s project.

There have not been many office dramas in Telugu but kudos to the makers for coming up with such a heartwarming and pleasant series. The production values are good. Cinematographer Edurolu Raju captured the office locations well.

Music by Dandi is good and fits the narrative. The editing by Praveen Pudi is very crisp. Coming to the director Siva Sai Vardhan Jaladanki, he has done a decent job in making a largely engaging show based on a few characters in a corporate world. Though he handled the drama well, he could have taken more care not to exaggerate and rush things which brought down the overall impact.

On the whole, Hello World is a decent show that tries to throw light on the corporate world. Director Siva Sai Vardhan is successful in extracting good performances from the lead cast and showcasing the organizational dynamics. On the flip side, a few aspects could have been handled in a better manner to make the series a lot better. Nonetheless, the reliability factor makes this office drama a decent watch.