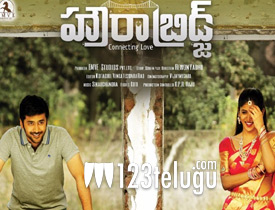 Rahul Ravindran, who is busy with his directional debut has come up with his new film as a hero. Titled Howrah Bridge, this film has hit the screens today. Let’s see how it is.

Rahul Ravindran is obsessed with his childhood sweetheart Sweety(Chandni Chowdary). But as time passes by, he leaves his village and settles down in Kolkotta. One fine day, he decides to find his love and comes back to his village. But the twist is that Sweety does not remember her past and ignores him big time. But Rahul somehow woos her and by the time Sweety gets ready to accept his love, Rahul gives her the shock of her life and leaves the village. What is that shock? What will Sweety do now? and how does the lead pair meet up during the end? That forms the rest of the story.

Rahul Ravindran does his best in his role as an engineer. He looks good as a lover boy and shares a good chemistry with the heroine. He has not been utilized well in the film. Chandni Chowdary is very impressive. Not only does she look beautiful, but does well in all the emotional scenes. She gets a meaty role and proves that she can carry a film as a single heroine now.

Manali Rathod plays her part well. The twist that is showcased during the interval is quite good and sets the tone right for the second half. Rao Ramesh does his villain act well as his diction and dialogue delivery is good. Ajay gets a meaty role and it is his character that makes sense in the film and the young actor does very well in a sacrificing character.

On paper, the story of Howrah Bridge is pretty good but the execution is a huge letdown. Firstly, the love between the lead pair is not showcased clearly. The heroine romances the hero gets cosy with him and even after that, she does not realize that she is loving him or not. That is the state of narration in the film.

The characters are not established well as everyone is singing their own tune in the proceedings. Rao Ramesh is shown in a lustful manner and one does not even know why does he do that right through the film. The title has no justification for the film at all which is yet another drawback.

After ending the first half on a decent note, things get so disappointing that you wonder what is happening in the film. Posani and Madhu’s comedy is silly and does not connect the dots at all. The climax is also over the top and just with a small incident, the heroine who hates the hero through the second half forgives him on a simple note.

Production values of the film are just about okay. The camerawork is average but the music and background score is pretty decent. Editing is pathetic as many scenes during the second half could have been chopped off. Dialogues are just about okay and the screenplay is horrible. Director Revan Yaadu falters with his execution in a big way. In spite of having a good premise and decent twist, he could not establish the drama, romance and screenplay well and ends the film on a disappointing note.

On the whole, Howrah Bridge is a good script gone wrong. Even though the story and premise of the film are good, the way it is narrated with illogical proceedings, lack of emotions and romance spoil the flow of the film completely. Chandni Chowdary and Rahul shine in her roles but the rest of the film is quite insipid and has nothing to offer. Watch it when it comes on TV.