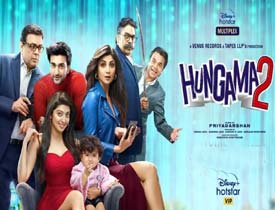 Continuing the trend of reviewing films and shows on OTT, today we review the much-awaited Priyadarshan flick Hungama 2. The film is now out on Disney Hotstar and let’s see how it is.

Akash(Mezan Jaffery) is all set to get engaged. When things are going well, Vaani(Pranitha Subhash) comes into the picture with her daughter and claims that Akash is her husband and has ditched her. On the other hand, Tiwari(Paresh Rawal) is an old man who has a young wife(Shilpa Shetty) Tiwari thinks, his wife is in an affair with Akash. This creates another tension for Akash. How will all this craziness be cleared forms the story of Hungama 2.

After a long gap, veteran director, Priyadarshan is back with a confusion comedy. All the actors in his hit films play lead roles and it is good to see them in on place evoking comedy. The comedy angle of Paresh Rawal and wife played by Shilpa Shetty is quite good but does not get enough screen space.

Meezan Jaffery is good in his role and has a lot of potential. The surprise package of the film is Pranitha who has the central role. She is very good in her character and gets a lot of screen space. Paresh Rawal evokes superb laughs whenever he is on screen.

Shilpa Shetty still manages to look gorgeous and sizzles in a few scenes. Rajpal Yadav is amazing in his cameo and is the best part of the film. The confusion comedy and a few scenes in the climax have beeb handled well.

The trailer of Hungama 2 revealed that the film will be based on Shilpa Shetty and her always doubtful Paresh Rawal. But that is not the case as the film entirely is on Pranitha and her story.

This is where the film goes for a toss for the most part as the drama and comedy evoked around Pranitha’s track does not have any juice and is bland. The film makes sense only when Paresh Rawal’s track comes into the picture.

Priyadarshan brings back the confusion comedy aspect but there are not many moments that are hilarious or bring back the trademark Priyadarshan comedy. The starting of the film is slow and the comedy looks a bit over the top in some scenes and the logic goes for a toss.

Venus has spent a lot of money on the film and this shows. The camerawork, locations, and production design is quite good. Dialogues are funny and those written for Paresh Rawal are hilarious. Coming to the director Priyadarshan, his comedy works only in parts and the basic magic in his narration is missing.

On the whole, Hungama 2 falls short of all expectations. There is a strong star cast but the emotions and story are routine and do not create that kind of effect one would expect. Shilpa Shetty-Paresh Rawal’s track is underused. In a way, Priyadarshan mark of comedy works only here and there making this film watchable just for a few laughs.