Review : Jilla – Only for the Masses 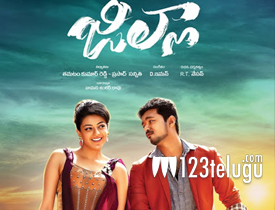 Jilla, the 2014 Tamil hit is dubbed into Telugu with the same title. Starring Vijay and Kajal Aggarwal in lead roles, this movie has hit the screens today. Let’s see how it is.

Sivayya (Mohan Lal) is a ruthless local goon in Vijayawada. He adopts Shakti (Vijay), son of his right hand who dies during a local fight. Sivayya decides to make Shakti a police officer to continue his criminal activities.

Shakti reluctantly takes up the role of a police officer. During his tenure, Shakti regrets his misdeeds and decides to follow the path of honesty. He also requests Sivayya to change but everything goes in vain as differences arise between the both of them.

How will the story unfold from here ? Will both Sivayya and Shakti re-unite again ? That forms the rest of the story.

The major attraction of the movie is the relationship between the father and his adopted son. The director portrayed the emotions quite well and particularly the scenes before the interval are executed nicely. Also, a couple of twists in the second half elevate the movie to a decent extent.

Mohan Lal does a superb job and shouldered the movie with a terrific performance. His look and screen presence gives an added advantage to the proceedings. Vijay also did complete justice to his character and his top notch acting in mass scenes will be a treat to the audience.

The last half an hour before the interval is the major highlight of the movie. The unexpected twists before the climax and Vijay’s role as a police officer will thoroughly entertain the audience.

Although this movie was a smash hit in Tamil, it lacks certain elements to woo the Telugu audience. After the initial half an hour, the tempo in the story slows down completely till the pre-interval block. The scenes between Vijay and Mohan Lal in the second half needed a much better execution.

Also, the scenes between Vijay and Kajal are not convincing and Kajal’s character needed a lot of establishment. The comedy track between Brahmanandam and other Telugu actors was not executed perfectly and is a total minus for the movie. The abrupt ending is also a big drawback for the movie.

Director NT Neason did an ok job with his execution. Music given by D.Iman impresses the audience only to some extent but his background score is quite good.

Cinematography by Ganesh Rajavelu is good as he captured the mood of the scenes in a beautiful way. Telugu dialogues written by Shashank Vennelakanti are decent. Editing is also OK.

The crazy combination of Vijay and Mohan Lal, did wonders in Tamil. But the same magic could not be repeated in the Telugu version. The acting showcased by both the superstars is very impressive. But the routine comedy, unconvincing romantic track, and below par songs are a big minus for the film. Overall, Jilla is just another regular commercial entertainer which will only impress the mass audience.