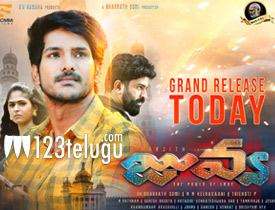 Juvva is one small film which has been promoted quite well among this week releases. Directed by Triekoti, this film has hit the screens today. Let’s see whether it impresses us or not.

Basavaraju is an arrogant rich kid who desperately lusts over his schoolmate Shruthi(Palak Lalwani). In that process, he kills the school principal and gets sentenced to jail for 14 years. Upset with this, Shruthi’s parents change her identity and shift her to Hyderabad. There, she gets close to Rana (Ranjith Somi), who is an easy going guy.

When everything seems to be going well in their life, Basavaraju comes out of the Jail and starts looking for Shruthi. Will Basavaraju find Shruthi’s whereabouts? What will Rana do to save his girl’s life? To know all this, you have to watch the film on the silver screen.

Top writer, M.Ratnam has provided a simple yet sensitive story. Coming to lead artists performances, debut hero Ranjith is good looking and gave an okay performance as the easy going guy. His dance movements in the introduction song are good.

Heroine Palak Lalwani is cute and her acting in a few key scenes is good. Performance of the guy who portrayed the elder Basavaraju is just about okay. Noted comedians Ali, Sapthagiri and Prabhas Seenu tried to evoke a few laughs here and there in the first half. Interval point is engaging and raises curiosity for the latter part.

Special mention to the kid, who portrayed Basavaraju’s childhood character. His sadistic acting and dialogues in the entire childhood episodes are impressive.

One of the major minus points of the film is its flat and dull screenplay. Though the storyline is decent, director deviated the proceedings with some unwanted subplots. The way Murali Sharma’s character is inserted into the plot in the second half is not convincing and looks silly.

Yet another drawback of the film is Basavaraju’s matured character. After watching his childhood scenes, everyone expects some hard-hitting performance from the elder part but sadly, the actor struggles to impress the audience with crucial sequences. The pre-climax proceedings and climax episode looks a bit rushed without any proper justification.

As said above, the film has a decent storyline but director Triekoti failed to narrate the film with proper engaging moments. If he would have executed the crucial point effectively, the result would have been even better. Editing work is decent as the runtime of the film is hardly 130 minutes. Cinematography by Suresh is good as he kept every frame quite neat. Music by top technician MM Keeravani is good and his background score for a few scenes is top notch. Last but not least, the production values by Somi Films are superb. Their lavish making reminds us of a few top big budget films.

On the whole, Juvva is a regular youthful entertainer which has only a few engaging moments. Though a few fun scenes and interesting interval block are good, the director fails to carry the same momentum throughout the film. All those who like mass entertainers and want to enjoy some fun comedy scenes can give this film a shot. But the rest can take it easy and watch the film at their leisure.