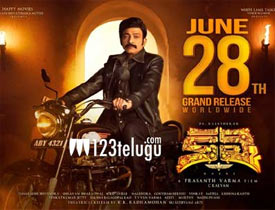 The trailers of Kalki have created a good buzz for the film which is directed by Awe fame Prashanth Varma. The suspense thriller has hit the screens today and lets see how the film turns out to be.

The story is set in the native village of Kollapur where two rival gangs are fighting it out and one among them, Shekar Babu gets killed. To investigate this case Kalki(Rajasekhar) is appointed. He starts getting deep into the case but to his surprise, there is much more to the murder mystery. What is that and how Kalki manages to unravel all this is the entire story of the film.

The production values of the film are pretty good as the film looks quite rich in every frame. Rajasekhar does a sincere job in his role of a cop. Credit should go to Prasanth varma for showcasing him in a superb manner.

Adah Sharma is neat in her role but Nanditha Swetha got a meaty role and she was quite Impressive in the second half. The last fifteen minutes of the film are quite engaging and the manner in which the twists are revealed during this time looks very good.

Rahul Ramakrishna was okay as the journalist who supports Rajasekhar but he needs to get rid of his weird hairdo and beard. Poojita Ponnada was effective even though she was seen in just a few scenes.

Siddhu Jonnalagadda gets a good and crucial role and he did well. Ashutosh Rana looked effective in his role of the main villain.

One of the biggest drawbacks of the film is the pace and lenght of the film. It is close to 2 hours 20 minutes which looks like three hours because of the dull narration in the first half.

The first half goes for a toss as the story takes for ever to reveal the actual twist. Rajasekhar and his flashback with Adah Sharma looks outdated and has only been used to make the film commercial. This could have been easily edited out and made things better for the audience.

In order to make the audience get confused, the director enters so many characters which have good purpose. But sadly, they are not unleashed properly in the narrative which keeps deviating the film at many intervals.

As said earlier, the production values of the film are Impressive. BGM is pretty good but is overused for scenes which were not needed to highlight at all. Camerawork is impressive and so was the production design. But there were too many slow motion shots. The film has a special color template and it looks good on screen. Music is just about okay.

Coming to the director Prashanth Varma, his thought process was okay but his execution is below par in the first half. In Awe, his screenplay was top notch and gripping but sadly in this film, things do not work that well for him as he makes a mess of the first half and only gets a hang of the things in the second half. But he ends the film on an interesting note by revealing the twists well.

On the whole, Kalki is an investigative thriller which clicks in the second half. There is nothing special or exciting about this film as the twists are revealed in an interesting manner in the last twenty minutes only. But to witness this, you have to sit though a dull first half. if you manage to do this, the film ends as just an okay watch.