Review : Katamarayudu – A treat for masses 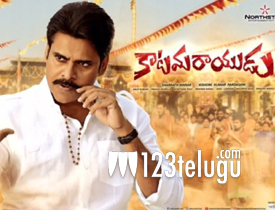 Whenever there is a Pawan Kalyan film coming up, there is a massive buzz all over. After the debacle of Sardaar, Pawan Kalyan is now back with Katamarayudu which has hit the screens all over today. Let’s see how it is.

Rayudu(Pawan Kalyan) and his four brothers live a happy life in their village. A strict and serious Rayudu does not marry as he feels that if a girl enters his family, there would be problems between him and his brothers.

On the other hand, all his four brothers are in love and want to get married soon. Knowing that in order for them to get married, they will have to convince Rayudu to marry first as he is the elder one. All of them get together, and make a plan and contact Avanti(Shruthi Haasan) to somehow woo their brother.

When things seem to be going fine, Shruthi Haasan’s family is suddenly targeted by Bhanu(Tarun Arora). Who is this Bhanu? What does he have to do with Avanti’s family? How does Rayudu save everyone? That forms the rest of the story.

Pawan Kalyan is undoubtedly the biggest attraction of Katamarayudu. He perfectly suits the elder brother’s character and carries the entire film on his shoulders. Right from Pawan’s traditional look to his classy dialogues, the star hero does full justice and impresses in an author backed role.

Shruthi Haasan is perfectly cast as Pawan’s love interest and all her romantic scenes with him are hugely entertaining. The first half has some decent comedy, romance and slick action sequences making the proceedings quite interesting.

Pawan’s chemistry with all his brothers is also very good. Shiva Balaji and others do their supporting roles quite well. Ali is good with his comedy during the first half.

The interval bang is just about okay and does not have much depth. The story of the film is quite routine and has some predictable scenes throughout the film. Things get disappointing during the second half as too many fights and dull emotions disappoint things a bit.

Anup Ruben’s music is the biggest disappointment for the film as none of his songs impress one bit and even come as speed breakers in the second half. There are not many twists during the second half as the film becomes quite slow during this time.

In spite of doing a superb job, Rao Ramesh’s role has been wasted in the film. The second half has no proper conflict of interest between the hero and villain as Tarun Arora looks pretty weak in front of Pawan’s star status.

Production values of the film are pretty good as Sharad Marar has spent decent money which shows on screen. The camerawork is top notch as the village visuals and Pawan Kalyan are showcased supremely well. Editing is below average as at least two fights in the second half could have been trimmed down. Dialogues are good and suit Pawan’s body language quite well.

Coming to the director Dolly, he has done a decent job with the film. After filling the first half with some very entertaining moments, he disappoints during the second half. His screenplay takes a beating during this time as the proceedings are filled with only stylish action sequences. Had he brought a bit more depth in the family emotions, things would have been even better.

On the whole, Katamarayudu is a treat for all Pawan Kalyan fans. The star hero’s emotional performance, traditional look, and superb fun during the first half are huge assets for the film. Katamarayudu is bound to do well among the masses but we need to see how the film fares in the overseas market. If you ignore the routine story line and a slightly dull second half, Katamarayudu is one film which ends up as a decent watch this summer.