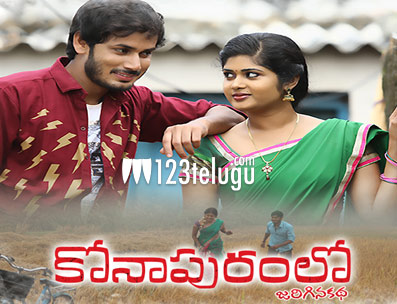 Continuing the trend of low budget films, Konapuramlo Jarigina Katha is one film that has hit the screens today. Let’s see how it is.

The film is based in a village called Konapuram. All of a sudden, young unmarried girls and guys keep getting killed one after the other for every fifteen days. This leads to a crazy situation in the neighboring villages as well. On the other hand, Suri(Anil) falls in love with Vennela(Sunita) and is scared to propose to her. Who is this killer? Why is he doing all this and amidst all this craziness, will Suri’s love story end happily? To know this, you need to watch the film on big screens.

The basic storyline of the film looks good. Hero Anil did his best in the role of a hero. He was good at all the emotional scenes in the film. Actors Reyan Rahul and Deva did a wonderful job in the film. In crunch situations, their performance was very good.

Heroine Sunita was decent in her role and was very good especially in all the love scenes. Yet another actress, Swetha did her supporting role convincingly.

Director Balakrishna had a decent storyline but he failed to execute it on the big screen. His narration did not have the needed punch and thrill which the subject needed in the first place.

Forced comedy takes a toll on the audience and sidetracks the film completely. If this was not enough, the same old scenes are repeated time and again at multiple times.

The second half had some key moments showcased in the flashback but all those scenes do not create any depth because of the dull narration prior and after that episodes.

Music by Satya Kashyap is decent and so was his background score. The production values of the film were below par. The screenplay goes for a toss as the key aspect is left aside and unnecessary scenes dominate the film. The camerawork of the film was pretty good. Lyrics were decent but the editing was bad. Director Balakrishna failed in his attempt to engage the audience as he diluted the script.

On the whole, Konapuramlo Jarigina Katha is a botched up romantic and crime drama that fails to engage the audience. The lead cast’s performance and some love scenes are good. But the repeated scenes and lack of emotional connect take the film down in no time making it a tedious watch this weekend.