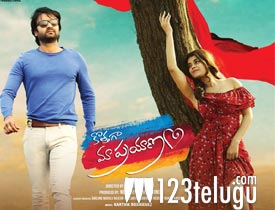 Karthik(Priyanth) is a software engineer who is very modern in his thought process. He falls in love with Keerthi(Yamini Bhaskar) and proposes live in relationship with her. As Kerthi also does not believe in the concept of marriage, she says and starts living with Karthik. As expected in any love story, problems arise between the lead pair and they get separated. Rest of the story is as to how the couple come to a safe conclusion about their relationship and end up together once for all.

Hero Priyanth was impressive in his role and did his character to the best of his capabilities. The manner in which he showcased all expressions during comedy, emotions and romance speaks volumes of his talent.

Heroine Yamini Bhaskar was also good in her role. The young actress was especially good in the climax and showcased good maturity. The actress who did the role of the heroine’s friend was also impressive in her supporting role and brought a lot of depth to the proceedings.

The concept of live-in relationship chosen is very good but has not been utilized well at all. The conflict point has not been established well in the proceedings and because of this many scenes look cinematic and fake.

Too many masala scenes between the lead pair look a bit over the top in the film and are only placed to attract the C center audience. Even though the hero does well, his role gets undue heroism and elevations which was not needed at all for the film.

Music by Karthik is decent and sounds well in the film. The camerawork is neat and showcases the modern set up convincingly. Production values of this low budget film are pretty good. As said earlier, the director failed to generate much drama between the lead pair and this took the film down in no time and bores the audience.

On the whole, Kottaga Ma Prayanam has an interesting concept but the narration is vague as the film has no engaging drama. There are a few raunchy scenes which will be liked by the B and C Center audience but the film does not make sense as it has a very thin conflict point which will not please all.