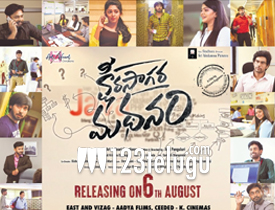 Continuing the trend of reviewing low-budget films, one more film which has hit the screens is Ksheera Sagara Madhanam. The film has been released today and let’s see how it is.

Govind(Gautam Shetty), Omkar(Sanjay Rao), Priyanth(Yogesh), Bharath(Mahesh Kammula), Ishita(Akshata Sonavani, and Virita(Charishma Srikar) are six software engineers who work in the same company. On the other hand, Rishi(Manas) is a cab driver in this company who is somehow connected to Ishita. In all this, the character of Omkar creates an issue that gets everyone in trouble. How they get out and how all the different tracks are connected to each other is the basic story.

The film has several actors and they all do a good job in their roles. Manas was very impressive in his character and is one of the mainstay of the film. Mahesh Kammula’s comedy was also pretty decent in the film.

The second half of the film is decent as the pre-climax and climax have been handled well. The screenplay during this time was also good and creates a suspense element for the audience. The fights designed were also interesting.

The first half of the film was pretty dull and there is nothing much that goes on. Also, the director takes a lot of time to get into the basic storyline of the film, and this is where things get slow. The villain character could have been elevated a bit more.

The story is good but the treatment of the director in key scenes was not that great. As he starts the film on a very dull note, things get bogged down and things make sense only when the film enters the main story.

The music was decent but the BGM was terrific and elevates the film in many areas. Camerawork and editing were also fine. Production values were just about okay. Coming to the director Anil, his idea is good but the way he narrated the film could have been better. He wastes so much time to enter the main story and this makes things disapppointing.

On the whole, Ksheera Sagara Madhanam is a modern drama that has an interesting backdrop. The film has a dull and boring first half. But once the film enters the main part, it makes sense and has some good moments and has been ended well. All those who like contemporary relationship dramas will like this film and the others can try it out when they have enough time.