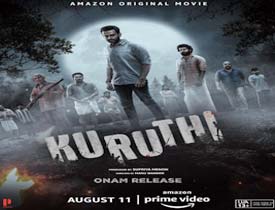 Continuing the trend of reviewing films and shows on OTT, today’s pick is the Malayalam film Kuruthi which is now streaming on Amazon Prime. Let’s see how it is.

Laiq(Prithviraj) is on the run to gun down a man who has killed his father. Things get serious when Laiq gets to face Ibru (Roshan Mathew), his father (Mamukkoya), brother (Naslen), and neighbor (Srindha). Who are these people? What is their connection to the story and how will Laiq handle them is the story of the film.

Prithviraj is in his elements in Kuruthi as she showcases a new side of his acting. The manner in which he goes about his role and creates an intimidation factor in the film looks so good. Prithviraj is the surprise package of the film and he will impress you big time.

Yet another major asset of the film is Roshan Mathew. The young actor is also terrific as the man who is going through his own turmoil in life. The way he manages the people around him and his religious beliefs have been showcased so well in the film.

Without taking any religious sides, the makers address several contemporary issues about religious issues in the country. The writing is good as the psychological thriller has good moments that keep you engaged. Mamukkoya also has a very good role in the film.

Though the religious issues showcased are good, they dominate the story in many areas. In some scenes, the main story is pushed beside and this angle takes center stage which was not needed at all.

The film takes some time to get into the actual story but makes sense after a while. The film has a serious tone and a few logic regarding the psychological thriller go for a toss. The political angle in the film is also dragged for no reason and should have been made crisp.

As in all Malayalam films, the camerawork is just stunning. The manner in which the dark theme of the film is elevated looks good. Dialogues are gripping and the screenplay for the most part is handled well. The music is okay but the BGM is gripping.

Coming to the director Manu Warrier, he has etched a good thriller and narrates it quite well for the most part. But he deviates from the point a bit and adds unnecessary elements which side-track the film.

On the whole, Kuruthi is a psychological thriller that has a very good backdrop. Prithviraj and Roshan Mathew kill it with their standout performances but the film gets deviated by topics of religion and politics. If you ignore this aspect, this film has engaging drama and ends as a decent watch this week.