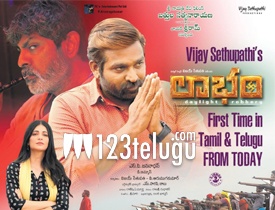 Vijay Sethupathi has a good craze among the Telugu audience and cashing on this, his new Tamil film, Laabham has been dubbed in Telugu. It has been released today and let’s see how it is.

Badri(Vijay Sethupathi) returns to his native place after an exile and straight away takes on the village head played by Jagapathi Babu. With the support of the locals, he becomes the president of the village and decides to give agriculture a new touch with his techniques. The rest of the story is as to how Badri manages the local goons with the help of Clara(Shruthi Haasan) and comes out victorious.

Vijay Sethupathi is the center of attraction in the film and does well as Badri. Though he did not have much to perform, he tried hard to decrease the damage. Shruthi Haasan was okay in her small role and so was the supporting cast which was mostly Tamil actors.

Jagapathi Babu gets a key role and he did well in it. He as the ruthless landlord is good in the second half of the film. The farming and how the villagers are suffering due to the wrongdoings of the landlords have been showcased well.

One of the biggest drawbacks of the film is the lack of basic emotions. In many key scenes, Vijay Sethupathi sleepwalks in his role. The conflict point is also not elevated well making things most of the time.

The confrontation between the hero and the villain is also not at all strong. Upon this, the length of the film is very long and bores you in many scenes. The issues taken up have good intentions but the manner in which they are narrated has no sheen at all.

Jagapathi Babu and his villain’s den has been showcased well in a stylish manner. Music is bad and even worse was the BGM. The editing is pathetic as close to twenty minutes could have been chopped off. The camerawork is good. Coming to the director late SP Jhananathan, he has not handled most parts of the film well. His idea is good but his execution was a total failure.

On the whole, Laabham is a film that even Vijay Sethupathi would like to forget. Boring narration, lack of basic emotion, and lengthy runtime disappoint the audience in no time and make this film a bore-fest this weekend.