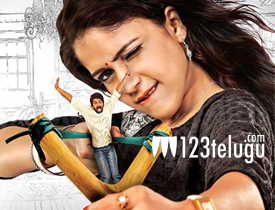 After giving two huge blockbusters, Lavanya Tripathi is back with her Andala Rakshashi co-star for a comic thriller Lacchimdeviki O Lekkundi. A prodigy of S S Rajamouli, Jagadish Talasila directs this film which has hit the screens today. Let’s now see how it fares.

The movie starts off by showcasing two unclaimed bank accounts. These accounts are of those who have expired and have no nominees. A dreaded criminal called Mahesh(Ajay) makes a huge plan to rob these accounts and traps one of the bank employees named Naveen (Naveen Chandra).

He threatens Naveen and asks him to further use his colleague Devi (Lavanya Tripathi) to fulfil his mission. Rest of the story is as to how Naveen manges to escape from this trap and saves the money along with Devi.

The short and crisp run-time is a major asset for the movie. The basic premise which deals with unclaimed bank accounts is interesting. The so called twists that are showcased are just about ok.

Naveen Chandra is decent in his role which has negative shades. Lavanya Tripathi looks apt and ably supports Naveen Chandra.

Ajay is okay as the bad guy and Jaya Prakash Reddy’s comedy evokes a few laughs here and there. The episode which comes during the interval has been showcased well.

Right from the story, screenplay to the execution, everything turns out to be disappointing. There are a number of twists but they fail to keep the story moving forward. Even after the compressed run-time, the movie still feels like a drag at places.

Even though there are only two songs, they come as speak breakers in the proceedings. The concept of spirit possession fails miserably and the reason behind it can be spotted easily.

There is no depth in characters written and the logic goes for a toss. The abrupt climax is a huge disappointment and chemistry between the lead pair is also completely missing in the film.

Surprisingly, M.M Keeravani’s music is below average but the background score is decent. Production values are satisfactory. Dialogues are adequate and so was the art direction. Editing looked jaded during the climax. Cinematography by Eshwar Yellumahanthi is commendable as the talented technician has showcased this thriller in a unique light.

Coming to the director Jagadish Talasila, he looses the plot after the first fifteen minutes but slowly picks it up during the interval point. As soon as the second half starts, the plot goes down hill once again and fails to pick up there after. Not once post the interval, his narration manages to evoke interest.

Overall, Lacchimdeviki O Lekkundi turns out to be a huge disappointment and brings a halt to Lavanya Tripati’s successful streak. Even though the interesting premise tries hard to engage the audience, the way proceedings are narrated with an half hearted approach makes matters worse. You can safely ignore this movie and choose something else from the other releases this weekend.