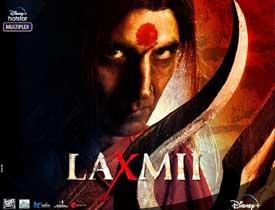 Right from the time the theatres have been closed, many films released on the OTT platforms. But the biggest film to hit the small screen is Akshay Kumar’s Laxmii. The film is now live on Disney Hot Star and let’s see how it is.

Rashmi(Kiara Advani) marries Asif(Akshay Kumar) who is a Muslim. This does not go well with her parents and they keep the couple away. But, after a while, the couple somehow reaches Rasmi’s house to seek forgiveness. Meanwhile, there is an empty ground beside Rashmi’s house which many say is haunted. Upon arrival, Asif breaks the myth and plays cricket on that ground. Things take a U-turn from there and the evil spirit enters Asif’s body as Laxmii. Who is this Laxmii? Why did she enter Asif’s body? and what is the back story? To know all this, you need to watch the film on the big screen.

Akshay Kumar is in that stage of his career where he can carry off any role with ease. In this film too, he is superb as Laxmii. In the first half, where he starts behaving like a woman, and in the second half where he becomes this powerful Laxmmii, Akshay Kumar has killed it. It is only because of him, things look passable.

Sharad Kelkar is the surprise package of the film and he is also stunning as Laxmii in the flashback mode. Though he has less screen time, Sharad does extremely well with his feminine expressions.

Kiara Advani looks cute and has nothing else to do in the film. The last ten minutes and the manner in which the powerful climax is showcased looks good. Aswini Kalsekar manages to do well in her comic role.

Lawrence has made several changes to the original and this itself is the biggest mistake he has committed. The characterization of Lawrence is of a quite scared man in the original but things have been changed for Akshay and this does not create a good effect.

The comedy which is the biggest asset of Akshay Kumar films sadly does not click here. The horror-comedy looks way over the top and Lawrence fails to get the pulse of the Hindi audience right. Such things work in the south but not with the north Indian audience.

The first half is dull and only Akshay’s performance keeps things clicking. Also, the conflict point in the flashback is not that strong as the villain is weak. Due to this, the film looks pale in many areas. There is no seriousness in many key scenes and because of this, one might lose interest.

Production values of the film are also quite dull as the visuals and production design looks just about okay. The BGM of the film is disappointing as the key comedy and horror scenes have not been elevated well. Dialogues are good and so were the costumes of Akshay as Laxmii. The camerawork is just about okay.

Coming to the director Lawrence, he has done an okay debut in Hindi. His films are high on comedy and emotions but that is missing in Laxmii. He has showcased Akshay Kumar in a solid manner and this is what saves the day for the most part for the fans.

On the whole. Laxmii is an over the top horror-comedy that does not create the needed impact. The horror is dull and the comedy does not click in the first half. Once the flashback starts, things look good but by then, it is too late as the emotions are not established. Those who have watched the original can take it easy but for those who haven’t, Akshay Kumar’s solid performance is the only solace and give this film a shot only for him.