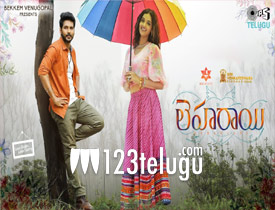 Well brought up Meghana (Sowmyaa Menon) promises her father Purushotham (Rao Ramesh), a doctor, that she will never love anyone and make him sad in life. Whereas Karthik (Ranjith Sommi) is a student, who doesn’t like to hear and say sorries to make excuses. One day, Meghana proposes to Karthik to get rid of a harasser. Did Meghana really love Karthik? What did Purushotham does next? The answers will be known by watching the main film.

The story is nothing new to audiences but the director tries to narrate it differently by including a new point. Two-movie-old actor Ranjith Sommi improved his acting in this film and he looks decent though. Whereas the Mallu actress Sowmyaa Menon looks beautiful in this romantic-comedy movie. This is her second Telugu movie as a heroine. Not only her looks but her performance is also decent enough.

This kind of father roles are tailor-made for the versatile actor Rao Ramesh and he delivers his finest performance and of course, his character stands out in the film. Naresh, Satyam Rajesh and others justify their roles.

As mentioned above, the plot is okay but the way the director Ramakrishna Paramahamsa narrated it is unimpressive. Though the film has good songs, comedy, and action scenes, it fails to engage audiences because of dull narration and unnecessary scenes, especially in the first half.

The lead pair looks good but they should have performed better. To talk about Sowmyaa, she looks nice but a little bit of performance could have helped her get some appreciation. To talk about songs, a couple of them are euphonious but their placement is inappropriate. The remaining songs turned out to be a hurdle to the movie.

Director Ramakrishna Paramahamsa dealt with a routine story and he failed to narrate it in an engaging manner. The cinematography by Balreddy and the music by Ghantad Krishna are neat. A lot of trimming by Prawin Pudi in the first half could have made the film get a thumbs up. The production values are neat.

On the whole, Leharaayi is a routine romantic drama that has a pale story and poor narration which is stuffed with regular commercial elements. Rao Ramesh’s performance is impressive besides a couple of euphonic tracks and a few laughs. The movie is a boring affair to watch this weekend and it’s better to look out for a good movie.