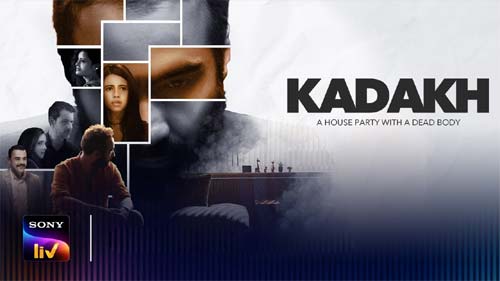 So, continuing the series of reviewing movies and shows during the lockdown period, our today’s pick is the new Hindi film Kadak. The film is available on Sony Liv and let’s see how it is.

Sunil(Ranvir Shorey) is happily sitting at home on a Diwali holiday. A guest named Raghav(Chandrachoor Rai) arrives and starts irritating Shim. At once, Sunil does not know who Raghav is but in further conversation, comes to know that Raghav is the husband of Chayya with whom he is having an affair with. The twists in the tale arise when an upset Raghav shoots himself. Sunil’s wife(Mansi Multani) arrives at the scene but she does not know about her husband’s affair. The rest of the story is as to how the couple manages the body with guests arriving back to back for Diwali celebrations.

Ranvir Shorey is a terrific actor and we all know that. He showcased his best as the confused, frustrated husband who is handling a murder scene. He is serious with his role but for the audience, the whole set up and how the character get tense is a lot of fun. The dark comedy touches many aspects and has scope for various emotions that are showcased well by the actors. The twists and turns in the film are pretty decent and come in quick succession without irritating the audience. Mansi Multani does a superb job in the role and adds a lot of depth to the proceedings. Cyrus is also good in his small role.

The plot of the film is simple and is established nicely right at the beginning of the film. But in the last half an hour too many characters are introduced making the narration dilute. Actor turned director, Rajat Kapoor has his story on point but his execution falters, in the end, make things look a bit over the top. Things look too silly as the way the main leads act in spite of having a dead body at home.

Overall, Kadak is a dark comedy with a superb premise and solid performances. The film starts off well but all the fun is diluted in the crucial last half an hour disappointing the audience. As it has a crisp runtime of under two hours, this film can be given a shot during this lockdown period but with very low expectations.