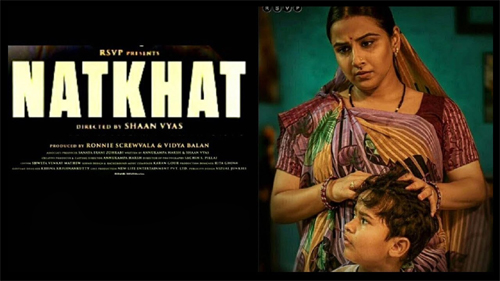 So, continuing the series of reviewing movies and shows during the lockdown period, our today’s pick is Vidya Balan’s latest Hindi short film called Natkhat which we watched when it was premiered live on Youtube a few days back. Let’s see how it is

Based in a small village of Madhya Pradesh, the film starts off with a shy housewife played by Vidya Balan serving food to some guests. Overhearing the conversation of these guests about a lady who is causing them problems, Vidya Balan’s six-year-old son, Sonu(Sanika Patel) says “Abduct that lady and teach her a lesson”. This shocking statement by Sonu shatters the living daylights of his mother. Upset by his behavior and upbringing, Sonu’s mother teaches her son what is right, how to respect women and to stay away from crime culture through a wonderful story of a king. How she does that is the whole story of the film.

The concept of this film itself is superb. How a young boy exposed to such culture in the crime based rural areas are brought up is shown in a superb manner. Vidya Balan, who also produces this short film is superb as the doting mother who is furious with her son but also needs to make him understand what is right in life. This aspect of her role, Vidya has balanced superbly.

The small kid played by Sanchita Patel also does an amazing job. The manner in which a mother teaches her son to respect women and how the rape culture is dangerous through a simple story so that the kid can understand is the best part of the film. All this has been showcased so nicely in the narrative.

There are certain scenes which look a bit overboard in the film. Like the way, the school kids are showcased dealing with crime in school. Also, the short film becomes a bit too preachy in the middle.

Overall, Natkhat is an amazing short film that deals with many sensitive issues in the best way possible. The whole setup of how kids need to be shown the right direction by parents, solid performance by Vidya Balan, and moral values in the film are just amazing and make it an interesting watch. It will be out on YouTube soon.