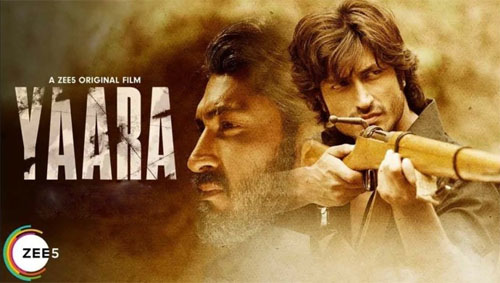 So, continuing the series of reviewing movies and shows during the lockdown period, our today’s pick is the Hindi film Yaara. The film is available on Zee5 and let’s see how it is.

Phagun (Vidyut Jammwal), Mitwa (Amit Sadh), Rizwan (Vijay Varma), and Bahadur (Kenny Basumatary) are four best friends who are also dreaded criminals. The work for a Delhi builder mafia and flourish under him. But trouble brews for them when Phagun meets Sukanya(Shruthi Haasan) who sympathizes with Naxalites. This brings trouble for the gang and they are jailed for years. Once they are out, things are not the same between the four as some want to lead a good life and some do not. What happens to the rest of the gang in this mature age is shown in the film.

Vidyut Jamwal is good in his role and has a lengthy character. Amith Sadh is doing his diverse roles quite well and is the same in this film as well. Shruthi Hasan does well in her limited role but does not create any impact. Sanjay Mishra is also okay in his role and does not do much because of his poorly written role.

The chemistry between the four friends when they are young looks tight when they commit crimes in a stylish manner. The film has solid technical aspects as the music and BGM are spot on. More than that, the visuals are arresting and crime scene is showcased quite well.

This film is adapted from a 2011 French film, Les Lyonnais but is lost in translation completely. The writing is bad and even after having some good performers, the characters are not at all strong and have no depth in them. The actors do not get much scope to perform and this is where the film goes for a toss.

There are many logics which goes for a toss. All the friends meet up after a long time but their whereabouts and what they were doing are not established much. The narration is jaded in the latter part of the film and this is where the emotions go for a toss and make the film boring. Once in a while, some good scenes come and go but that is not enough for the audience to sustain this film.

Overall, Yaara is a film about friendship, crime, and believing one another. Even after having solid performers, the narration is jaded and the emotions are missing in the latter part making this film a boring watch during this lockdown period.