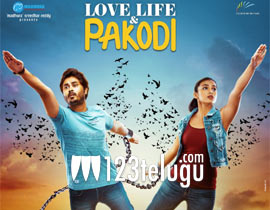 Producer Madhura Sreedhar always gives chance to young actors in his films. He is ready with his new film Love Life and Pakodi that has hit the screens today. Let’s see how it is.

The film is set in Bangalore and is about Arun(Bimal Kartheek) and Rheya(Sanchita Poonacha). Arun meets Rheya after she breaks up with her boyfriend. Slowly, a friendship grows between the two and they end up having an affair. But things change when Arun proposes to Rheya who rejects his offer. Rheya loves Arun but does not want marriage. How will Arun solve this tricky situation? That forms the story?

The film deals with modern day relationships and how today’s youth who are based in metropolitan cities think about love and marriage. The basic theme of the film is decent and has also been set amidst a good premise in Bangalore.

The main lead looks promising and hold the screens well. Hero Bimal Kartheek is impressive in his role and gives a settled performance. He was good in all the break up scenes and has a good screen presence. The dialogues which are mostly English have been written well. The second half has some better emotions and drama when compared to the first half.

Coming to the heroine Sanchita, she is the best part of the film. She as a bold and today’s girl gives an impressive performance. Sanchita is quite subtle with her body language and also conveys the emotions without much melodrama. Her performance in the climax where she mouths a lengthy dialogue was good.

When you take up such bold subjects which are contemporary, the narration should be lively. It is hard to understand why the premise is kept so serious. The film misses a joyful atmosphere which was atleast needed in the first half as it has a modern relationship being showcased.

Instead, the director keeps the hero’s character dull. There was chance for some fun, feel good romance and breezy scenes but all that is not given importance. Also, the film is 90 percent in English and will be tough for the normal audience to get the feel.

The lead couple have too many conversations that also make the film boring in many areas. The emotion between the lead pair is not that strong as the intensity is missing in most of the characters. Also, the pace of the film is quite slow and the entire first half is dragged for a small conflict to erupt.

The film has a decent premise and camera work showcases the Bangalore lifestyle well. As said earlier, dialogues are also good. Editing is not that great as the first half feels lengthy. Music is decent but the BGM was better.

Coming to the director Jayanth, his story idea is pretty good and is also new for Telugu movies. But he chose to narrate his film on a serious note. The film has so much scope to evoke good drama, comedy and romance but is made dull with slow pace. The pre climax is where things get going and the film ends on an impressive note. The film on paper is good but the screenplay is not at all racy.

On the whole, Love Life and Pakodi has a decent premise and contemporary storyline. The film starts on an impressive note and performances of the lead pair are also quite good. But the jaded narration, and lack of depth in emotions take the film down. What could have been a fun rom-com is made quite dull. It is neither intense or is lively and gets stuck somewhere in between.