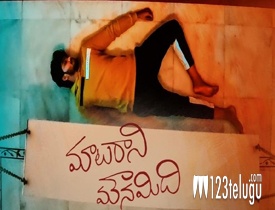 Today a small film starring Mahesh Datta, Soni Srivastava, Srihari Udayagiri, and Sanjai Raai in the lead roles has hit the theatres. It is a mystery thriller. Let’s find out how the film is.

Ram (Mahesh Datta) and Eshwar (Sanjai Raai) are brother-in-laws. Eshwar would have married Ram’s elder sister. She would have already passed away by the time the story starts. Ram visits Eshwar’s house on his personal work. A worker who comes for the gardening work finds a ring and gives it to Ram who wears the same. One fine morning he accidentally meets Seetha (Soni Srivastava) who is speech impaired. Both fall for each other very quickly. Meanwhile, Ram starts to experience supernatural elements within Eshwar’s house due to the ring. A big twist would shock both Ram and Eshwar and they both land in huge trouble. What is that trouble? Did they come out of it? How is the ring connected to this story? This forms part of the rest of the movie.

The basic plot point of the film is really good and pretty interesting to say. The scenes starting from pre-interval to interval create confusion and raise curiosity as to what is happening in the film and this is when we are thrown a huge twist that definitely surprises us.

Continuing the momentum the second half starts off quite well. Though the scenes of bringing in an exorcist are not new it is engaging enough. The second half of the film has a few decent moments that hook the audience. Comedy works at places.

Mahesh Datta is good-looking and makes a decent debut. He has good potential. Soni Srivastava gets a meaty role and she is too good in it. The standout performance comes from Srihari Udayagiri who plays a key role in the film.

Though the film had a lot of scope, a more gripping narration would have made matters better. The editing is something that needs a bit of correction. Even though the scenes are decent they are prolonged.

The flashback episode in the film takes more screen time. The supernatural elements could have been a bit better to give the audience a tense factor while watching.

Viewers would be disappointed towards the end as the dots are not connected well. The songs play a spoilsport in this thriller, especially the special dance number.

The music by Asheer Luke is in sync with the film’s theme. His background score is also fine. The cinematography by Shivaram Charan is appreciable. Though the locations are fewer, he captured them fairly well. The production values are great.

As discussed above, the editing team should have been more cautious. Coming to the director, Suku Purvaj, he has taken a gripping storyline but didn’t succeed completely in narrating it in the same way. He managed to extract solid performances from the main characters though.

On the whole, Maatarani Mounamidhi has a good concept. It has decent enthralling moments, solid performances from the lead cast, and captivating music. But the connection regarding the key scenes to the main twist hampers the overall feel a bit and makes it a half-baked mystery thriller.