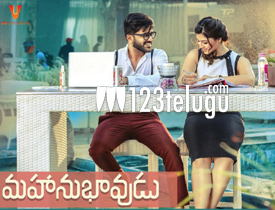 Sharwanand has once again dared to release his film Mahanubhavudu during the intense competition from Jai Lava Kusa and Spyder. The comedy caper has hit the screens today. Let’s see how it is.

Anand(Sharwanand) is a software engineer who has OCD problems. He falls in love with his office mate Meghana(Mehrene) and somehow manages to impress her. But a sudden and unwanted incident involving Meghana and her dad(Nasser) causes a huge rift between the couple. Rest of the story is as to how Anand, who is a cleanliness freak goes all the way to Meghana’s small village and wins his love back.

One of the biggest assets of the film is Sharwa’s characterization. Maruthi has nicely weaved a story around a guy who is a cleanliness freak. His casting is superb as Sharwa is the apt guy for such roles and impresses big time. He is so lovable in the film and the way he has lived his character and generated comedy through it is superb.

Meherene gives superb support to Sharwa and looks gorgeous. She has an important role and her chemistry with Sharwa is too good. Vennela Kishore’s comedy with Sharwa in the second half elevates good fun. The added bonus to the film is Thaman’s beautiful songs which have been shot quite well.

Maruthi nicely establishes Sharwa’s character in the first half and elevates it with hilarious comedy episodes in the later part. Because of this, the second half becomes hilarious and has very nice family moments. Nasser is good in his role and Baddam who did the role of Jiddesh is quite impressive as well.

The film is quite predictable right from the start. Except for the novel factor of Sharwa’s OCD, rest of the setup is quite routine. Climax of the film is also old school and is dragged a bit.

Even though good fun is generated through Sharwa’s role, the concept is taken a bit over the top at times. The first half is quite simple as nothing much great happens during this time and the proceedings take their own sweet time to establish.

As said earlier, Thaman’s music is top class. Production values by UV Creations are top notch as the film looks clean like its concept. Lyrics are quite romantic and the dialogues were hilarious. Cameraman Nizar Shafi showcased the film in a uber posh manner during the first half and made it quite rooted during the second half. He has showcased Sharwa quite neatly just like his character in the film.

Coming to the director Maruthi, he once again proves that he is really the king of comedy. The way he generates comedy through unique concepts and situations is his strength and for this film as well, he evokes super fun moments through Sharwa’s role. His star status will surely go to the next level as he has given a clean comedy film which will be loved by all sections.

On the whole, Mahanubhavudu is a good and clean family entertainer which has some very entertaining moments throughout. The unique concept of OCD and the fun generated through it will click with every section of the audience. Apart from the concept, rest of the story is old school and the film has a bit slow first half. If you ignore these aspects, Mahanubhavudu will be a perfect choice among the festival releases and ends up as a happy watch with your entire family. Go book your tickets.