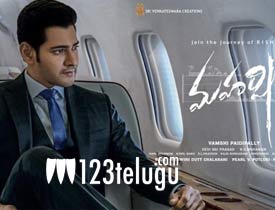 Mahesh Babu’s Maharshi is undoubtedly one of the biggest releases in recent times. The film directed by Vamsi Paidipally has hit the screens amidst massive expectations. Let’s see whether it lives up to all its hype or not.

Rishi(Mahesh Babu)is a reputed CEO of a multinational company in the US. In his urge to become the best in the world, Rishi forgets his past and several relationships. One fine day, he comes to know that Ravi Kumar(Allari Naresh) a very close friend of his is behind all his success. During the same time, Rishi also finds out that Ravi is in deep trouble in his small village of Ramapuram. Rest of the story is as to how Rishi leaves his rich lifestyle and saves Ravi and his village from all the problems it is suffering from.

One of the biggest attractions of the film is undoubtedly Mahesh Babu. He is seen in three different avatars and fans will just love him. Be it the college look or the CEO avatar, Mahesh plays it to the galleries and is different in each of the roles. The manner in which he transforms in the second half and showcases his mature acting is very good. Undoubtedly, Mahesh looks super handsome than ever and leads from the front.

Perhaps it was the best decision of Allari Naresh’s career to accept this supporting role. The supremely talented actor proves that he is not only good at comedy but can also portray the emotional part in the best way possible. His chemistry and all the scenes with Mahesh have come out quite well and are a major asset for the film.

Pooja Hegde looks glamorous and is a perfect fit in the role. She does well in the company of Mahesh and their college episodes have come out well. The first half of the film is entertaining with good comedy and sensible college scenes. Vennela Kishore in neat in his small role and so were the supporting actors.

The emotional subject chosen featuring the farmers works well in the film and is the mainstay during the second half. Rajeev Kanakala, Jayasudha, Rao Ramesh are adequate in their respective roles. The relationship between Prakash Raj and Mahesh Babu has been showcased in an interesting note. Kamal Kamaraju gets a good role.

One of the biggest drawbacks is that the film is a bit slow and lengthy. The second half gets emotional and is highly predictable. There is nothing new that is showcased here in the film during this time.

The love story featuring the lead pair is not at all interesting. Allari Naresh who is the mainstay is sidelined a bit in the second half. Jagapathi Babu looks dull as the villain as his track and conflict are not established well with Mahesh.

Though DSP’s music was ordinary, his songs sound good along with the visuals. But his background score raises the film to another level altogether. Lyrics by Srimani are top notch and meaningful. The camerawork is supremely good as the college backdrop, US set up and village atmosphere has its own charm and looks good on screen.

Editing is not that impressive as the film can be edited for about ten minutes easily. Special mention to all the stylists of Mahesh as the star hero has been styled in a superb manner. The production design of the film is amazing as the makers have not compromised on the production values at all.

Coming to the director Vamsi Paidipally, he has done a good job with the film. Rather than opting for sheer entertainment, he chooses an emotional subject and shows that our roots are more important than fame and money. His narration in the first half and how he establishes the journey of Rishi is very good. In the second half, though he makes things predictable, he adds decent emotions in the last half an hour and ends the film on an impressive note.

On the whole, Maharshi is the journey of a man who finds his roots back in his motherland. Who better than Mahesh Babu to portray all this which has been narrated in an emotional manner by Vamsi Paidipally. Top-notch performances, decent humor, relatable social message, and Mahesh’s screen presence are main assets. If you ignore the slow pace and slightly predictable second half, this film has in it to work with a major section of the audience and the holiday summer season will help the film in a big way.