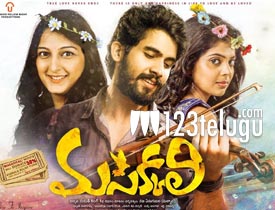 Continuing the trend of small films, yet another youthful entertainer called Masakali has hit the screens yesterday. Let’s check how it is.

Suriya(Sai Ronak), who is a medical student falls for Aakanksha’s(Sirisha) kind-hearted nature. When he is about to confess his love, she disappears from the scene all of a sudden. On the other hand, as per his lecturer’s guidance, Suriya takes up the case of Shruthi(Shravya) who suffers from a major disorder.

As days pass by, Suriya opens up about his love story to Shruthi and to his shock, he learns that Shruthi knows everything about Aakanksha. Who is this Aakanksha? What is her backstory? and What does Shruthi know about her? To know this, you have to watch the film in theaters.

Looks wise, hero Sai Ronak is good and gave a decent performance as the heartbroken lover. Especially, his acting in the emotional scenes which come during the latter half featuring his father is very good. Heroine Shravya is good in her role as a work-minded young entrepreneur and impresses with her cute expressions.

Yet another heroine, Sirisha is okay and did a decent job in her given crucial role. Comedian Naveen’s comedy is okay and evokes good laughs here and there. Some scenes between the lead pair in the first half have been showcased well.

In general, many small films have a good concept but the execution part gets diluted due to lack of director’s inexperience. But here in Masakkali, there is no concept and the narration also goes for a toss. Those who enter the theater expecting the film to be a triangle love story will literally get shocked to see the silly proceedings.

Except for the lead artists decent performance, the director creates a lot of confusion which irritates the audience. The makers have taken too many cinematic liberties as most of the scenes look fake and over the top.

Coming to the director Nabi, he is the major culprit as his story and execution have too many loopholes. He should seriously come up with better ideas in his upcoming films. The cinematography is decent as a few frames in the film look fresh and colorful. Editing work is just about okay. Music is not up to the mark as the songs and background score don’t help the film in any manner. Production values for this low budget film are decent.

On the whole, Masakali is a logic less love story which has no proper story or depth in the narration. Those who expect a feel-good love story by looking at this film’s title will be disappointed big-time once they start watching the film. All we suggest you is to skip this film and look for better options this weekend.