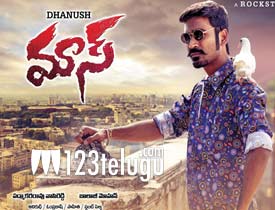 A dubbed version of Dhanush’s Tamil flick Maari titled Mass has hit the screens today. Let’s see how it fares.

Maari (Dhanush) is a local don who becomes quite popular after murdering a powerful goon eight years back. As time passes by, a cunning cop named Arjun (Vijay Yesudas) gets transferred to that area and he makes it a personal mission to put Maari behind bars.

As expected, the strength of the movie is Dhanush himself. The national award winner’s impulsive performance and terrific screen presence manage to enthrall the audience big time. Kajal Agarwal looks beautiful and does well within her limitations.

Robo Shankar entertains the audience to an extent with his quirky one-liners. Another plus point is the superb background score by Anirudh which elevates a few scenes quite nicely.

Except for the things said above, everything falters in this film. The film is a badly written with too many sub-plots that fail to entertain the audience. Except for the bits and pieces of comedy sparsely spread out, the film has nothing to boast about.

The narration lacks any significant twists or turns and the characterization is equally bad. Mass is an example of an exaggerated and formulaic entertainer that is played to the galleries and relies solely on the main lead’s popularity.

Also, the run time is a huge minus and could have been easily shortened. The translation is also quite poor and better care should have been taken.

Being a dubbed film, the production values of the original are appreciable. Music by Anirudh is just about okay, excluding the background score which is excellent. Editing is very poor. Camera work is nothing exciting. Dialogues loose meaning due to poor translation.

Coming to Balaji Mohan, he has chosen an impressive cast but failed badly in choosing the right script. In the process of trying to make a commercial entertainer, he forgets to add in the required entertainment. The plot is very flimsy and has zero originality.

On the whole, Mass is purely for Dhanush fans only. Even though he tries his best to keep the ship afloat, too many holes in the narration and script end up sinking it big time. The film vows to test the patience of the audience and can be left alone this weekend.