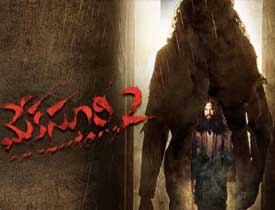 So, continuing the series of reviewing OTT shows and films, our today’s pick is the Telugu film Meka Suri 2. The film is available on Zee 5 and let’s see how it is.

Meka Suri(Abhinay) is a butcher in the Singarayakonda village. Sadly, his wife Rani(Sandhya) gets raped by Appalnaidu(Sharat Kumar) In order to take his revenge, Suri gets into the Naxal movement and is shown to be killed by the cops in the first part. In the second part, things are shown in a way that Suri is still alive and giving justice to all those who create sexual violence by forming a Dalam. How ACP (Pramod) gets him back is the story of this sequel.

Abhinay continues from where he left off in the first part. He has a different dimension to his role in the sequel and the young actor impresses quite well. The twists in the film are petty good and have been showcased quite well. Also, the point of view of key characters has also been shown well.

The emotions in the hero’s track look strong and impactful. The actor who did the role of cop Veera Bhadram also did quite well. The actors who played terrorists also did a decent job in their roles. The nativity scenes and the backdrop have been nicely elevated by director Trinadh.

The over buildup given to Suri’s character looks a bit over the top. Also, the conflict point is not established well as the director focused more on the suspense elements and this is where the main cause of the film looks deviated. The pace of the film is dead slow and one needs to have the patience to allow the scenes to grow on one properly.

The film starts off on an interesting note but from there, the narration is jaded as there way too many unnecessary scenes that create a hindrance. The action part could have also been toned down to make things better.

The camerawork of the film is too and the natural locations have also been showcased in a natural manner. Editing is decent and so was the production design. Production values are good and the situational songs were also decent. Coming to the director Trinadh, his work is decent in the emotional part. The manner in which he extracts the performances is also good. But when compared to the sequel he adds way too many unnecessary scenes and derails the narration.

On the whole, Meka Suri 2 has a good setup and realistic performances. The film has impressive scenes in bits and pieces but the same emotion is not carried as unnecessary scenes sidetrack the main conflict point and make the pace slow. All those who like rustic action dramas can try this film and the rest can take it easy.