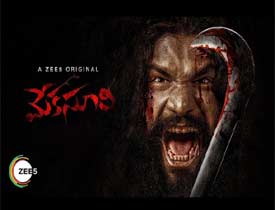 So, continuing the series of reviewing movies and shows during the lockdown period, our today’s pick is the Telugu film Meka Suri. The film is available on Zee 5 and let’s see how it is.

Suri(Abhinay) is a sheep butcher who is known as Meka Suri in his village. As time passes by, Suri falls in love with Rani(Sumaya) who works with a dreaded person called Appala Naidu. So many in the village including Appaa Niadu try to woo Rani but she marries Suri. The twist in the tale arises when Rani has a physical relationship with Appala Naidu shocking Suri. The couple gets into a big fight and Rani gets killed later. Who killed Rani? Why did she sleep with Appala Naidu? Who is behind all this? That forms the rest of the story.

The main lead, Abhinay is a good find. He does a good job in his mass role and impresses throughout. Be it his look, body language, or mass dialogues, the young actor did well. Abhinay was very good in scenes where he becomes mentally upset and also in the pre-climax and when the heroine gets killed.

Heroine Sumaya also suits her role well and did justice to it. Her natural look and the way her role is written looks good. The film is quite realistic and raw and credit should be given to the director for keeping an intense atmosphere in the film. The actors who did the roles of Appala Naidu and SP Veera Bhadram are quite impressive and bring depth to the film.

The film has a realistic effect but to make things look raw, the makers have added too much violence which was not necessary at all. When you look at the scenes individually, they look good but they do not gel well in the narrative in many places.

After starting the film on an interesting note, the director diverts the attention with some silly and boring scenes which eat the runtime. The emotions are missing in key areas in this revenge story which makes the proceedings dull. The film had an interesting premise but too many forced scenes just to create an impact spoil the mood.

Yet another highlight of the film is the camerawork. The rustic visuals of the film have been showcased in a wonderful manner. Music and BGM are impressive. Production values and editing are also impressive. Coming to the director Trinadh, his idea is quite impressive and has also set his film in a solid backdrop. He also starts the film well and introduces his characters well. But to make things more realistic too much violence and drama are added which was not needed at all and make things complex.

On the whole, Meka Suri is a rustic village drama that has a few impressive episodes. The backdrop and performances are realistic but too many forced scenes and unnecessary violence kill the interest of the audience. Storywise, there is nothing new in this film and can be given a shot only if you love such raw action dramas. But be prepared for the routine revenge drama.