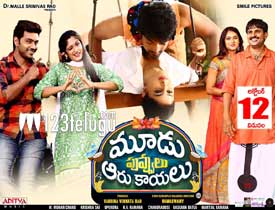 Along with Bewarse, yet another small film titled ‘Moodu Puvvulu Aaru Kayalu’ has also released today. Let’s see how it is.

Moodu Puvvulu Aaru Kayalu is the life story of three roommates portrayed by Arjun Yagith, Ramaswamy and Bharath Bandaru. Each of them has their own set of problems and try to come out of it. What sort of hurdles do they face in their individual lives? How will they overcome and lead a happy journey? That forms the rest of the story.

Arjun Yagith is decent as an aspiring cop and did whatever was needed for the role. Be it maintaining proper physique and delivering dialogues on a high pitch, the young actor has done it all with a lot of conviction. The second lead, Bharath Bandaru gave a good performance. Especially, his acting in an emotional scene in the latter half was impressive.

The major minus point of the film is its routine storyline and lackluster screenplay. We have seen so many films made with this beaten to death friendship and love genre. The narration lacks proper sync and freshness in it.

After a point of time, the audience literally feels like watching a teleserial as the characters and their aims have no purpose in the film. Comedian Prudhvi was totally wasted and his cheap B-grade comedy irritates the audience. Yet another minus point of the film is that it lacks proper songs and glamour quotient which would have been useful to the proceedings.

The film has a routine storyline but at least director Ramaswamy should have focused on writing an entertaining screenplay. Instead of proper narration, the film has a few illogical scenes like the hero get busy romantic his girlfriend while his father is dying in the film. Editing is disappointing as many unwanted scenes in both the halves can be chopped of easily. The cinematography is below par. Music is not up to the mark and so was the background score. Production values for this low budget film are adequate.

On the whole, Moodu Puvvulu Aaru Kayalu is a failed attempt which has no freshness in the story. The screenplay is jaded and too many unwanted scenes and lack of entertainment take the film down in no time. All we suggest you is to just stay away from this film and look for better options this weekend.