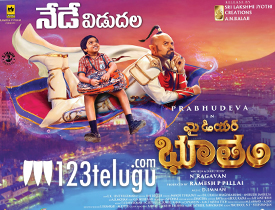 Choreographer turned actor Prabhudeva is back to entertain the audience with the fantasy drama My Dear Bootham. He teamed up with N Ragavan. The film has hit the screens today. Let’s see how it is.

Karnamukhi (Prabhudeva) heads the evil kingdom. One day his son Kinginiya disturbs a sage who will be in deep meditation. Sage who gets frustrated by this act thinks to curse Kinginiya. But Karnamukhi asks the sage to curse him instead. The sage curses Karnamukhi and turns him into a statue. He tells Karnamukhi that even if someone releases him from the curse, that person needs to mouth a certain Sanskrit sloka in 48 days for Karnamukhi to return to his world. Else Karnamukhi will die. On the other side, we get to see a schoolboy Srinivasa Rangan (Ashwanth Kumar) who faces problems with his fellow mates due to his stammering issue. One day the school takes him to an exhibition where he accidentally releases Karnamukhi from the curse. The rest of the story is about how Karnamukhi changed the kid’s life. Did Karnamukhi return to his world? How did Karnamukhi change Srini’s life? These questions will be answered only on the big screen.

Ashwanth Ashok Kumar (the kid who played a small role in Super Deluxe) is a major asset to the film. His performance as a kid who has the stammering problem is fantabulous. He matched Prabhudeva equally. Definitely, Ashwanth will have a bright future ahead.

Prabhudeva perfectly suits his role. His screen presence, charisma, and dancing skills are very much spot on and entertain big time.

The bonding between the kid and Prabhudeva is well depicted. The entire first half is high on entertainment. The story is well established in the initial hour and sets the tempo for the next hour. This movie has enough content to appeal to kids. Ramya is decent in her role as the kid’s mother.

Compared to the first half, the second half slows down. After a point of time, things get repetitive and boring. The story is something which we have been seeing in numerous films of this kind. The treatment is outdated and it feels like watching an old movie.

The VFX is a big letdown. As the film is set in the fantasy genre, one expects visual effects to be good. But sadly this aspect disappoints. The film doesn’t appeal much to adults.

The climax is another disappointment that is not handled well and one finds it silly. The drama between the kid and his mother is not portrayed properly. The film goes flat without any twists and turns. It gets predictable completely.

Director N. Ragavan did a decent job in handling this fantasy drama. He established his point well but he could have done a lot better.

The VFX team should have taken a lot more care as the visuals are not good on screen. They seem a bit odd in many places.

The cinematography is decent enough. Music by Imman is fine and the background score is extraordinary. The editing is crisp.

On the whole, My Dear Bootham has a largely entertaining first half and an average second half. The director started off quite well but lost his grip in the latter part. This fantasy drama has enough elements to appeal to the kids, but for others, it ends up as a passable watch. You can give this a try if you love fantasy drama.