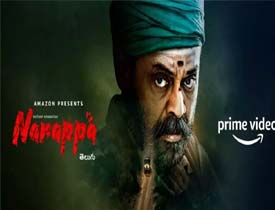 Narappa is one of the biggest Telugu movies to be out on the OTT space. Starring Venkatesh and Priyamani in lead roles, this film is out now on Amazon Prime. Let’s see how it is.

Narappa(Venkatesh) leads a peaceful life with his wife(Priyamani), daughter, and two sons in a small village in Ananthapur. The village head, Pandusamy plans to capture Narappa’s land and this does not go well with his elder son Munikanna(Karthik Rathnam) who locks horns with Panduswamy. Calamity strikes and Narappa faces a huge loss. In an unexpected manner, even as Narappa stays calm, his younger son, Sinnappa takes a violent route for revenge, leading to dangerous consequences. Was Narappa able to protect his family and lands? That forms the rest of the story?

The film has a solid backdrop and has been set well in the Telugu nativity. The locations, production values, and shots executed give this film a rustic feel. Srikanth Addala does well with his taking and does not experiment much. He keeps the emotions intact from the original and showcases Venkatesh in a solid manner.

Coming to Venkatesh, you can say that it is one of his career-best performances to date. Venkatesh shocks you with his aggression and emotional outburst. Generally, we are used to seeing Venky in fun roles but he plays the double role and is also good as the aggressive young man. Watch out for Venky and Priyamani’s performance during their son’s death scene.

The national award-winning actress, Priyamani plays her supporting role perfectly. She is the apt choice for the role and Priyamani brings a lot of depth to the whole setup. The dialogues and the Anantapur accent are also used well in the film.

More than anything, the strong emotions make Narappa click majorly in the first half. Rajeev Kanakala gets an amazing role after a long time and he ably supports Venkatesh throughout the film.

With each passing day, Karthik Rathnam is getting superb roles and his role as Munikanna is amazing and the young actor does exceptionally well in the first half. The child actor who played Sinnappa was also terrific.

After the emotional and gritty first half, the pace of the film drops big time. The film is taken into a flashback mode and this disturbs the proceedings a bit. The problems which the lower class people suffer are shown mostly in this flashback and it does not create much impact.

A lot of time is taken for this flashback and Venkatesh’s small love track involving Ammu Abhirami also does not help the proceedings. The ending is also a bit slow and is wrapped up on a simple note.

Narappa is quite predictable and all those who have seen Asuran will get disappointed during the second half as the intensity misses a bit though the film is ended well.

Production values of the film are top-notch. The intensity and raw look are created superbly by the camerawork. Dialogues are good and so was the costume design.

The screenplay was decent and nicely elevates the emotions and tragedy in the first half. Mani Sharma’s music is decent but his BGM was solid.

Coming to the director Srikanth Addala, he makes a good comeback with Narappa. He is quite strong with family emotions and showcases them in a good manner in Narappa as well. His hold on the screenplay is good and did not let the guard down for the most part. Had he made the second half also quite gripping, things would have been even better.

On the whole, Narappa is a well-made family drama that has some solid action and emotions. The storyline is a bit predictable and things get slow in the post-interval parts. Those who have watched the original will surely draw comparisons, but the engaging narration and Venkatesh’s standout act clear all the glitches and make this film a breezy watch this weekend.