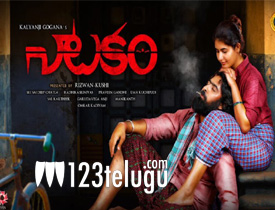 Natakam is one film which created a good curiosity with its interesting trailer. The village drama has finally hit the screens today and let’s see how it turns out to be.

The film is based in the small village of Chitalapudi where a group of chain snatchers plans to rob the whole village. On the other hand, Koti(Ashish Gandhi) is a happy go lucky youth who falls in love with Parvati(Ashima Narwal) and decides to marry her. The twist in the tale arises when the love story receives a sudden setback because of Parvati’s past. Who is this Parvati? Why is she in Chintalapudi? and What happens to all the chain snatchers? To know these answers, you need to watch the film on the big screen.

The lead actor, Ashish Gandhi is the backbone of the film. He looks handsome and has a very good screen presence. Gandhi has been showcased very nicely as the village stud and his emotional performance lifts the film most of the time. The young actor has a good future and if selected his roles well, he could be a very good asset to the Telugu film industry.

Heroine Ashima makes a good debut and suits her village belle’s role perfectly. She provides the needed eye candy through her glamor show and shares good chemistry with the hero. The set up of the film looks quite realistic and has some good moments in the first half.

The family emotions showcased through the hero’s father looks decent in the film. Director Kalyanji has written the hero’s characterization well and even narrated a few scenes with a lot of depth in the first half.

After a decent first half, the tempo of the film falls flat within no time. Unnecessary songs come and deviate the topic. Scenes are repeated many times in the film. Even the songs showcased have the same format as the hero just follows the heroine and romances her all the time.

The major twist that is showcased looks outright silly and nose dives the film in the last fifteen minutes. All the scenes which are showcased after the revelation of the twist look over the top and are hard to believe.

Also, the so-called chain snatchers thread which is built up from the beginning is ended with just a simple fight scene. One can say that what could have been a good film is spoilt by the director’s fixation over repeated scenes and illogical narration in the second half.

Sai Karthik’s music is pretty good as all the songs sound good on screen. Even better was his background score which elevates the village nativity quite well. Garuda Vega Anji’s camera work is top notch as he showcases the village visuals in a very good and rustic manner. Editing by Manikanth is below par as many repeated scenes could have been chopped off to make the film crisp. Production values by Rizwan Entertainments are cool as the film has a really ethnic look and resonates the backward areas well.

Coming to the director Kalyanji, he has done a below average job with the film. He starts the first half well and shows good promise. Surprisingly, he makes things so silly and repetitive in the second half that it is hard to believe. He has the talent as he conceived scenes in an interesting manner but when you see them in total, there is no flow and this is where Natakam goes down in the later part.

On the whole, Natakam shows a lot of promise in the first half but the silly and lethargic second half takes the film down in no time. Hero Ashish Gandhi tries hard to save the film with his standout performance but the narration is so jaded that things go out of hand and the tempo is never built up again. Finally, the curiosity that the trailers created is sadly not generated in the proceedings making this film a below-par watch this weekend.