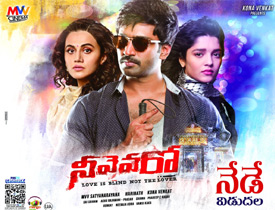 Neevevaro has been riding on decent expectations after the engaging trailer caught the attention of movie-goers. Starring Aadhi Pinishetty, Tapsee Pannu, and Ritika Singh, the movie has hit the screens today. Let us see whether the suspense drama can keep the viewers engaged or not.

Kalyan(Aadhi Pinishetty) is a blind chef, who feels that his self-belief and determination is much stronger than his medical condition. His childhood friend, Anu(Ritika Singh) stands by Kalyan and has a special place for him in her heart but Kalyan doesn’t reciprocate any such feelings.

One fine day, Kalyan meets Pallavi(Tapsee Pannu) and falls for her after seeing her kind-hearted nature. Even Pallavi develops a liking towards Kalyan who agrees to bail her out of a big financial problem. Just when everything seems to be going fine, Kalyan meets with a small accident and while treating him, the doctors discover that he can regain his vision after a surgery.

As soon as Kalyan regains consciousness, he finds out that Pallavi has gone missing. Will Kalyan be able to track down Pallavi? and what is the actual twist behind this story? The answers to these questions form the main plot of the film.

Aadhi Pinishetty proved that he is a worthy actor quite a few times in the past and lives up to his tag in Neevevaro as well. Aadi managed to show a good variation between the two phases of his role and makes the proceedings look quite convincing.

Tapsee Pannu gets a meaty role and comes up with a very good performance in the film. Ritika Singh looks good on screen and does justice to her role. Aadarsh Balakrishna is also seen as a visually impaired person and his portrayal of the character is very natural. The other supporting cast did their part well. A few sequences in the second half run on an engaging note and rake decent suspense.

The comedy track featuring Vennela Kishore tickles the funny bones as the star comedian provides some ample entertainment with his one-liners and peculiar wordings which are good.

Neevevaro is one such movie that needed to keep the viewers glued to the screen right from the word go. However, the patchy screenplay in the first half puts off the viewers. The introductory part looks like it was dragged unnecessarily and this damages the tempo.

One may expect an intense second half that runs on a tracking down the heroine concept but the movie takes a slightly different path. Action lovers may feel distracted as comedy supersedes the original plot of the movie.

Once the conflict point is revealed, the climax is nothing more than a weak and predictable revenge drama that runs on a wafer-thin plot. The writer should have upped the unpredictability factor to offer a new experience to the viewers.

The director, Harinath, adapted to Kona Venkat’s riddled script and does well to an extent. He tries his best to keep things going by running a few comedy episodes on Vennela Kishore but falls short of ideas during the crunch pre-climax sequence.

Music by Achu Rajamani and Prasan is just about okay. Only the ‘Vennela’ song has repeat value and the rest fail to pack a punch. The real standout is the background score which is something new in terms of its sounding. The production values are good as every frame looks rich and vibrant. Also, the men behind the camera did a decent job.

On the whole, Neevevaro is a typical suspense drama that banks on an ensemble star cast and a slick technical team. The core plot evokes a few emotions but falls short of intensity in the pre-climax episodes, dipping the excitement factor when it matters the most. Decent comedy from Vennela Kishore works well in the second half but that is not one would expect from an intense suspense thriller. Also, the screenplay fails to pack a punch once the conflict point is revealed making it just a below-par watch this weekend.