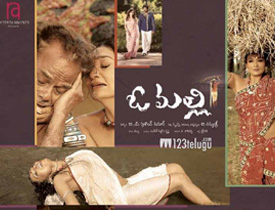 The hot and happening Ramyasri has taken up direction for the very first time and has come up with a film titled O Malli. This hard hitting drama has hit the screens today and let’s see how it is.

Malli(Ramyasri) is a tribal girl who lives with her drunkard father(L B Sriram). One fine day, a guy named Ramulayya(Raghu Babu) spots her in the village and falls in love with her. He even fights with his parents and convinces them for his marriage with Malli.

As time passes by, Ramulayya gets paralyzed and is forced to stay at home. Left with no choice, Malli takes things in her hand and starts earning for the family. This is also the time when she meets Ravi (Aakash) and becomes good friends with him.

Twist in the tale arises when Ramulayya starts suspecting that Malli is having an affair with Ravi. He gets into a huge fight and kicks Malli out of his house. Rest of the story is as to how Malli manages to over come her problems and what happens to her during the course of time.

Ramyasri is the basic asset of the film. She handles various departments and does her role sincerely. She is apt in her role and does well in many scenes. What’s more interesting is the way she has extracted performances from all her star cast.

Raghu Babu does a serious role and is superb in his handicapped character. L B Sriram is also good as the drunkard and irresponsible father. Second half of the film is hard hitting and has some decent drama. Ramyasri’s performance especially during the climax is impressive.

Story of the film is quite old and has been dealt in many movies in the past. Also, the way the film has been narrated on a very dramatic manner is also big let down. Major scenes in the film are jaded as the film looks quite old in many scenes.

O Malli is a serious film and the way it has been promoted can mislead many. The serious problems and the way certain scenes have been showcased without much grip may not go well with many.

Production values of the film are pretty good. Even though this is a small budget film, the way it has been shot and set up in a tribal village is pretty good. Camera work is realistic and so is the art direction. Coming to the director Ramyasri, the way she has dealt with the misunderstanding factor in many scenes is good.

On the whole, O Malli showcases how women folk are misunderstood in various facets of their daily life. This is a kind of film which is made for the target audience and is quite mature in nature. All those who like realistic dramas and are okay with seeing the harsh realities of life can give this film a shot. Rest can take it easy.