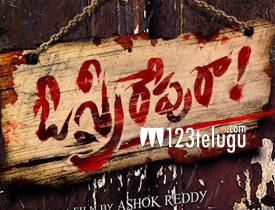 In the 90s, there used to be numerous rumours that several villages in the Telugu states are haunted by ghosts at night. People used to write “O Sthree Repu Raa” on their compound walls so that the ghosts would never enter their houses. To this interesting premise, director Ashok Reddy infused fiction elements and made it even more intriguing with a tagline, “real or fiction”. The film has hit the screens today and let’s see how it has fared.

Monica (Diksha Panth) is a writer who desperately tries to publish her stories. In this process, a publisher commissions her to write about the “O Sthree Repu Raa” story which got several villages shivering in the past. Monica and her boyfriend (Ashish Gandhi) try out various means to know the mysteries behind this story. Finally, Monica finds her story after she plays a planchet game with the souls of the dead.

What is the mystery behind this ‘O Sthree Repu Raa’ story ? How are Seenu (Vamsi Krishna) and Kalyani (Shruthi Mole) linked to this entire set up ? and how does Monica end her story in all this chaos form the main crux of the film.

The intriguing story is undoubtedly the major highlight of this film. The director penned two interesting parallel stories around the “O Sthree Repu Raa” mystery by adding some fiction elements. The film’s opening scene is quite good and sets the mood right. The “O Sthree Repu Raa” suspense has been maintained till the end.

The realistic love story between Seenu and Kalyani in the second half is quite impressive. All the actors did their part quite convincingly. Ashish and Vamsi Krishna are impressive. Especially, Vamsi gave a decent performance in the pre-climax scenes. Both the heroines are decent in the glamour departments.

The makers made a huge mistake by promoting “O Sthree Repu Raa” as a horror film. The horror part doesn’t last for more than fifteen to twenty minutes. Those who watch the film expecting a horror flick will be disappointed. After the interesting ten minutes in the beginning, the film meanders throughout the first half.

The love story in the second half is too lengthy. Certain scenes seem repetitive. Songs are a major hindrance to the film’s flow. The concept of unravelling the mystery by playing the planchet game with the ghost isn’t convincing.

Though the director comes up with an interesting premise, he fails to narrate a thrilling horror drama for two hours. The film’s lack lustre screenplay doesn’t help the proceedings either.

Ghantasala Viswanath scores thrilling background score. Manohar’s cinematography is decent and sets the mood for the love story in the second half. The production values are pretty decent.

O Sthree Repu Raa is a fictitious film based on the ghost rumours which haunted several Telugu villages in the 90’s. The film can only be watched for its interesting premise and the way the suspense is carried out till the end. However, a half-baked execution, lack of riveting horror drama and meandering scenes disappoint the proceedings big time and make this film an outdated horror drama.