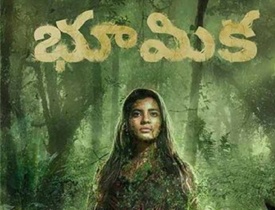 Aishwarya Rakesh’s Boomika is billed to be India’s first eco-horror. The film is streaming on Netflix now and here’s our review of the film.

Story:
Samyuktha(Aishwarya Rajesh) moves into an abandoned school along with her husband and her kid as they plan to demolish the enclosure and build an eco-living space with 500 villas. However, there’s a supernatural force that stops them and it doesn’t hesitate to even take lives in the process. What does the family do next?

Blending horror with a socially relevant subject sounds very interesting and Boomika runs on similar lines. The film has a fresh and intriguing premise.

The film has an atypical climax. Rather than having a big reveal, the proceedings towards the end round off the story and explain the backstory behind the killings in the area. This elongated climax holds the attention and gives a deeper idea of the entire story.

Despite having a good premise, the film progresses on a predictable note for most parts. The horror scenes are formulaic and they don’t pack a punch.

The film unfolds at its own pace and it certainly doesn’t cater to all sections of the audience. Those who don’t have a liking towards slow-paced thrillers will not find this film engaging enough.

The director Rathindran picks a socially relevant plot and infuses horror into it. But his narration is uneven. Cinematography is of top-tier quality as the scenic locales of Ooty are captured very well. Background score is good.

Boomika has a good premise but the screenplay is a bit too slow-paced at times. The intensity in the horror scenes isn’t on a desired level. The ending is good but what precedes is a mixed bag.