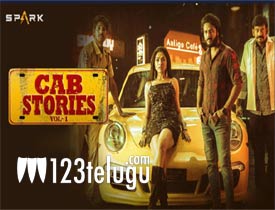 Continuing the series of films and shows during the lockdown, today’s review is about Cab Stories, which is a thriller streaming on SPARK. Let’s see how it is.

Giri(Giridhar) is a cab driver who accepts a ride from some people who are in a hurry. One of them leaves a drug packed in the car and then, a drunk girl(Divi) hires the same cab. In a crazy turnaround of events, the drug packet ends up in Divi’s purse. The drug mafia starts cashing the cab driver and things become even crazier when the drug packet changes many hands. How will Giri and Divi escape this situation forms the story?

Divi makes her full-fledged debut as a heroine with this film. She gets to showcase her dancing skills and also emotes well in the film. She also has a decent screen presence but needs to work on her body language though which is a bit stiff.

Noted actor, Giridhar gets a good role and he does quite well as a cab driver. Dhanraj is decent in his role and so was the supporting cast. The first half an hour of the film is quite interesting as the story is set up quite well.

After a decent start, the narration goes for a toss as the seriousness is missing in the film. The actors who played the bad guys are new and do not create any impact at all. The whole film is about the goons finding the drug packet but there is no fear of crime that is created through them.

Divi has nothing much to do in the latter part of the film. Even though the film is just one and a half hours. close to fifteen minutes could have been chopped off. The episode of the heroine’s friend dealing with her lusty boss is just boring to the next level.

The writing is bad and so was the execution which does not provide any thrill factor. The film is ended on a bad note as well without any clarity.

Production values of the film are just about okay. But the BGM is quite good and elevates many scenes. The camera work which showcases the night scenes is good. Also, the dialogues are good but the screenplay and execution are quite dull and make the audience bored. Editing is bad as close to ten minutes could have been chopped off.

On the whole, Cab Stories is a film that has an interesting storyline but is spoilt by some bad narration. Divi does well in her role but the lousy writing, lack of twists, and dull climax make this film a boring and silly watch during this lockdown.