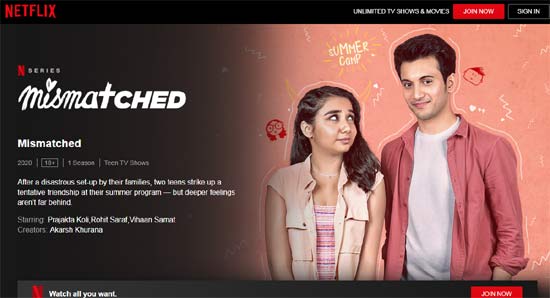 So, continuing the series of reviewing movies and shows, our today’s pick is the web series Mismatched. Starring the Youtube sensation, Prajakta Kohli, the series is available on Netflix. Let’s see how it is.

Dimple(Prjakta Kohli) is a geek who wants to launch an App of her own. But her middle-class family wants to marry Dimple off when she wraps up her education. During one summer camp, she comes across Rishi who is fed up with his posh lifestyle. Things look tough but as time passes by, sparks fly between the two and things change eventually. How the lives of these crazy two end form the story of Mismatched

Sensational Youtuber, Prajakta Kohli makes her acting debut with this series and she was amazing. Not once do you feel that Prjatka was doing her first-ever big show? She as the nerdy girl look is spot on and is endearing in the later parts of the show. Acting-wise, she has the talent and was good in her emotional scenes.

Rohit Saraf was good as well in his lead role. Though he looks a bit naive in the beginning, he holds on well by the end of the series. His chemistry with Kohli was the best part of the show. The supporting cast was also good and give able performances. MTV hottie, Ranvijay Singh is adorable in his role.

The young theme of today’s student lives has been showcased well. Though the story looks a bit old the manner in which they have set it up in this time zone looks good. The BGM for all the romantic moments was good. Camerawork and production values were also the top class in the show.

The world of Mismatched is a bit different and is created artificially. So, it takes some time for you to get used to the set up of today’s fast-paced generation. The initial episodes also become slow as the characters are also established at a very sweet pace which might not go well with some.

The subplots in the show eat up most of the time and make things slow. The love story between the lead pair should have been narrated in a more impressive manner. There are many scenes which are borrowed from several Hollywood based rom-com and an Indian tadka is give to it.

On the whole, Mismatched is a teenage love story that has some good moments. The casting is right and the dreamy situations and the youthful atmosphere is set up well. Barring the predictable story and slow pace in the mid episodes, this series is for today’s generation who love college rom-coms with an urban feel. Watch it at your leisure.