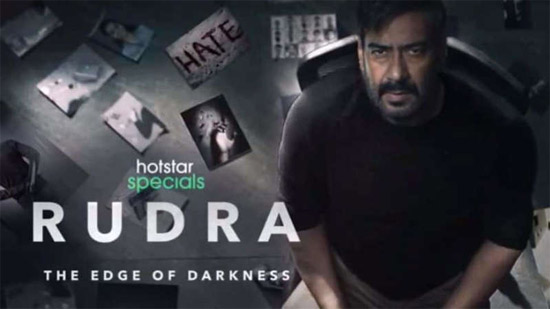 Ruda- The Edge of Darkness marks the debut of Ajay Devgan and Raashi Khanna into the world of OTT. The six-episode series is now streaming on Hotstar and let’s see how it is.

Rudra(Ajay Devgan) is a cop whose suspension is revoked as crimes in the city of Mumbai are on the rise. Rudra has less time to stop these crimes. He meets a psychopath Aliyah(Raashi Khanna) and makes friends with her for a motive. Each episode has a new villain and upon this, Rudra is also going through a deep mess in his personal life whose baggage he carries all the time. What will Rudra do now? how will he solve so many mysteries? That forms the storyline.

Ajay Devgan is an intense actor and this works big time for the OTT show. There is nothing new for Ajay to showcase as a cop but the way he carries the deep emotions of his personal life are unleashed so nicely by the actor. Ashwini Kalsekar as the female cop is top-notch and does not get intimidated by Ajay Devgan’s strong persona.

Raashi Khanna gets a different role and she does well as the psychopath Aliyah. Though her red wig looks horrible, Raashi does well in all the scenes with Ajay Devgan. Initially in the series, Raashi goes overboard but once the show progresses, she is top-notch. Atul Kulkarni is amazing as always and gives a knock-out performance.

The crime setup and the various crimes showcased look quite good. The first three episodes are quite thrilling and keep you engaged. Rudra is an official remake of the BBC series Luther and has been adapted well in Hindi. KC Shankar is very good in his role.

One of the biggest drawbacks of Rudra is the excessive length of each episode. The makers’ spoon feeds each and every crime and how it is solved. Too much detailing also bores the audience in so many places.

Esha Deol and her whole track are quite disappointing. She sidetracks the show and makes the audience lose interest whenever she comes on screen. Also, the crimes showcased do not excite you that much. Probably, more novelty in this department would have made Rudra a more intense show.

The production values of the show are top-notch. The camera department does well in creating a dark theme for the show. But the close-ups they put on Ajay’s face were so irritating. The editing is bad but the production design was good. Dialogues, styling, and action thrills are also decent.

Coming to the director Rajesh Mapuskar, this is his first OTT show and he has done a strictly okay job. He has handled Ajay Devgan’s part well but in all this, the novelty factor is gone. The adaptation from English to Hindi is good but the thrills and drama is lost in translation.

On the whole, Rudra -The Edge of Darkness is a crime drama that banks heavily on the performance of Ajay Devgan and Raashi Khanna. While they are top-notch, the excessive length and uneven pace spoil the mood of the audience at times. Watch it only for Ajay Devgan and if you are a fan of crime thrillers.