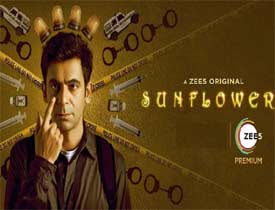 Continuing the trend of reviewing shows and movies during this lockdown, our today’s pick is Sun Flower, a new Hindi series on Zee 5. Let’s see how it is.

The entire story is based in an apartment called Sun Flower. A divorced rich man gets killed in mysterious circumstances and the cops start their investigation. Sonu(Sunil Grover) is a middle-aged bachelor who gets entangled in the murder. Who is behind this murder? and did Sonu get out of the case. That forms the story.

The setting of this comic mystery thriller is quite good. It starts off well and the investigation looks quite interesting until the fourth episode. Sunil Grover is turning out to be one hell of an actor and he as Sonu, is a great watch. His comedy timing and screen presence suit the show quite well.

Ranvir Shorey as the cop is amazing and brings depth to the show. Ashish Vidhyarthi as the apartment community manager was good. The twist in the last episode is also well thought.

As the show has a great setup, things look good initially. All the characters and who could be involved in the murder are established so well. Even Sunil Grover’s characterization looks good. But once the fourth episode starts, things get boring.

The show gets dragged on and on and the thrill factor goes missing after the fourth episode. So many unnecessary characters come into the foray and make the show boring. Also, the way cops operate the case looks a bit over the top.

The production values of the show are pretty good. But what catches your eye is the superb BGM and the hook-up sound that is used to elevate scenes is to die for. The camerawork, production design, and locations are quite good.

This show has been created and directed by Vikash Bhel and he has done a below-par job. What could have been a solid show filled with thrills is let down by silly scenes and dragged screenplay.

On the whole, Sun Flower is a series that has a great setup. But the shoddy direction spoils the show by the end. Things look good until the fourth episode but from there, it is downhill as the show is left incomplete for the second season. Sunil Grover is good with his antics but the show as a whole is just about okay.