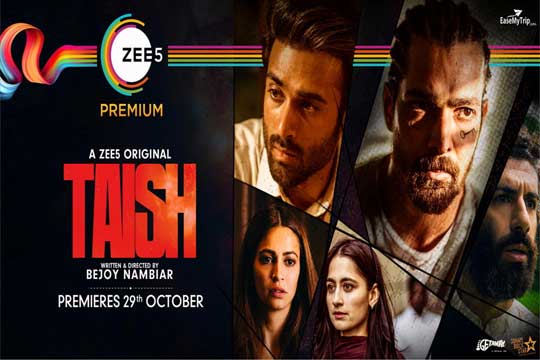 So, continuing the series of reviewing OTT shows, our today’s pick is the Hindi web series Taish. The series is available on Zee 5 and let’s see how it is.

The series is set in London and in an area called South Hall. Rohan Kalra(Jim Sarbh) is a doctor who is in love with a Pakistani surgeon Arfa(Kriti Karbanda). He comes back home to his brother’s wedding but things go for a toss when Pali Brar(Harshvardhan Rane), the dreaded don from the Brar family comes and threatens to kill everyone as his elder brother(Abhimanyu Singh) is attacked. Rohan then comes to know that it is Sunny(Pulkit Samrat) who is the one who is behind this big feud. This tussle creates a big fight between two families and everyone gets involved in the war of ego. Who kills whom and who survives this deadly onslaught is the rest of the story.

Director Bejpy Nambiar is known for his solid emotions in his films and the same continues in this series as well. The emotions are solid as the anger and frustration to kill each other is beautifully showcased. The families are rooted and each character gets solid screen time. The action part, BGM, and dialogues are solid and create an impact through the series.

Pulkit Samrat is very good as the aggressive and hot-headed guy. Kriti Karbanda gets a key role and plays her supporting role well. Jim Sarbh is okay in some parts. The whole gangster set up and how each one tries to outdo the other is nicely elevated. The climax is also nicely done with proper justification. Sanjida sheik is also good in her role.

But the series belongs to Harshvardhan Rane, the Telugu actor who plays Pali. He as the dreaded don is just amazing and means business. Be it his look, or intense avatar with deep emotions, Rane has showcased things in a solid manner. This is his best performance to date and he shocks you with his deadly transformations.

Jim Sarbh gets a meaty role but his acts and performance in key scenes look weird. The way his role is anchored through the series looks a bit out of place. You cannot understand what he is going through in the first place. The story of the series is a bit routine as the fights between two families has been showcased in many shows previously.

Also, the way crime and bloodshed that happen at the drop of a hat in a city like London looks a bit over the top. Also, there is too much use of Punjabi language which makes things difficult for a few to understand.

On the whole, Taish is a gritty action drama that has solid emotions and mind-blowing performances. Though the story is old, the way Bejoy Nambiar sets it up and narrates it with gripping drama and racy action part makes this series an engaging watch. Go for it.